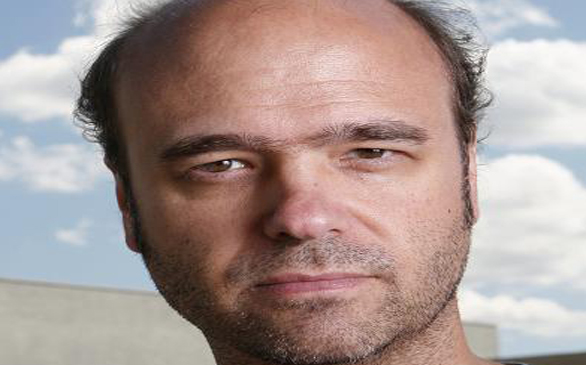 Better known as Pete Hornberger, Scott Adsit does a hell of a job fulfilling his ensemble duties as the straight man to “30 Rock”’s crazy. His character is fairly simple and easily dismissed. Yet, the history of the man behind the Hornberger is sophisticated, and far more applauded. But, judging by ol’ Pete Hornberger, you would’ve never guessed it.

“I’m serving a function, and that’s what my training is, to be ensemble. The story needs someone to be a little straighter or just be funny for brief sprits or provide information otherwise, then that’s my function,” explains Hornberger – er, Adsit. “I got to serve the peace.”

Consider one of his three recent shows at the Upright Citizens Brigade in New York, “Adist and Gausas.” An hourlong one-act relationship improv with partner Christina Gausas, the show is far more than just set up and punch line.

“We try and make it drama and let the comedy come, rather than force laughs or beg the audience to laugh,” describes Adsit. “Generally, we get these huge responses because we’re committing ourselves emotionally to the scenes, more so than a regular sketch comedy.”

That commitment to character has earned Adsit endless accolades as a brilliant improviser and actor. His past performances at Second City stood out amongst casts that included future “SNL”’ers Tina Fey, Rachel Dratch and Adam McKay, and even earned Adsit the Joseph Jefferson Award for Best Actor in a Comedy. Similar to many of theater’s greats, that success kindled a move to Hollywood. As a TV journeyman, Adsit played roles on “The Office,” “Malcolm in the Middle,” “Alias,” “CSI: Miami,” “Friends” and “Curb Your Enthusiasm” before landing conflicting callbacks for both “30 Rock” and “Studio 60 on the Sunset Strip.”

“It was a little tough because on one hand my friend [Fey] was starting this show, and on the other hand is Aaron Sorkin coming off of ‘The West Wing,’ batting a thousand. He was the horse to bet on,” recalls Adsit. “But I love Tina, and I knew I would have a better time sitting in a room with Tina than I would with Aaron Sorkin, probably. So, I just went with my friend.”

Given the fate of “Studio 60,” and the trophy case over at “30 Rock,” Adsit’s bet seems to have been well calculated. But Adsit shrugs off his judgment as one demanding very little thought given his past history with Fey when both were fledglings at Second City.

“Second City is a bit like college, or even a fraternity, because you spend 80 percent of your day with the same six people. I feel that anyone I put a show up with is family,” explains Adsit. “And so, Tina is like my sister. We’re just automatically close because we’ve been through a lot together.”

Thus, Pete Hornberger is born. But yet again, the story doesn’t end there – not nearly.

“We started with just the idea of a show about religion, and hypocrisy within it. But also, the silly angles and takes we could have on religion. It was just silly and naughty and dirty, at least at the beginning,” Adsit recalls. “We kept writing and it became more and more heartfelt, and the show evolved over the three seasons to what was eventually a drama, essentially.”

Although that idea did blossom into a multiple Emmy Award-winning series, its far less wacky second season also earned “Moral” the network axe. Nevertheless, Adsit and “Moral Orel” collaborator, Dino Stamatopoulos, are returning to television again with another stop-motion on their hands for – guess who – Adult Swim. This time, something a bit more of a “German expressionistic gothic sort of thing” called “Mary Shelley’s Frankenhole.”

“It is hard to describe. It’s about Dr. Frankenstein and his family and all the monsters that surround him classically,” explains Adsit. “The plot hinges on celebrities from history coming to him through these Frankenholes through time to ask for his help, usually in a surgical matter.”

Adsit swears they’ll tread a bit lighter this time around, at least at first. Whether with “Mary Shelley” or with Pete Hornberger, that seems to be the brilliance behind talent like Adsit – his ability to tread lightly.

Because, believe me, he doesn’t have to.