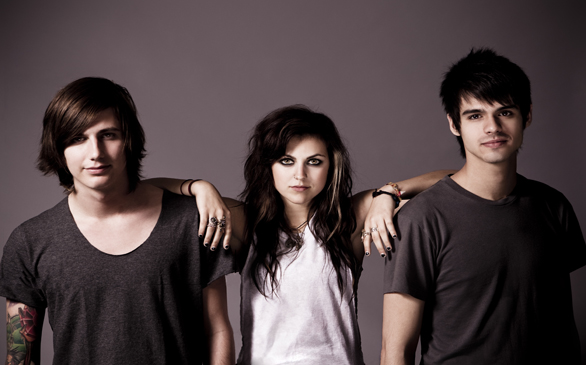 Witness VersaEmerge straddle the fence between hard rock and pop at all three-area Warped dates.

It seems no matter how old I get, the lead up to Warped always feels like the anticipatory days leading up Christmas, my birthday and the first day of middle school all wrapped up into one. You can be as jaded as you want, you can’t not get stoked on Warped once you set foot on the fairgrounds venue of your choice. The demographic has shifted a bit for the tour’s 16th year out, this time in a decidedly more danceable direction, but fans across the rock spectrum should be able to discover more than their share of new favorite bands this year. You just have to do a little hunting to find them, so here’s your road map to this year’s tour. Bands are playing all L.A. dates unless otherwise noted.

There are a lot of bands doing this kind of music this year on Warped. Like, a lot. Unlike all those other bands though, the local dudes of Call the Cops do the synth-heavy dance pop really well. Minimal vocal distortion balanced by knowing when to drop the dance and bring the rock, these guys are the monstrous chimera of what the Academy Is… would sound like if they didn’t totally fall off the wagon and if 3OH!3 wasn’t a complete farce of a band.

One of the hardest working dudes you’ll ever meet in the music industry, Jason Evigan is one of the most engaging frontmen on the tour this year as well. Another homegrown L.A. band, After Midnight Project can do radio-friendly dance pop without any of the attached posturing or cheap gimmickry.

Big sounding rock ’n’ roll that isn’t afraid to strip things down and show some emotion when the moment’s right, here’s another group of guys who can pull in influences from rock history while still being very modern. Above all else though, they manage to remain relatable while they do it.

Frontman Ace Enders took pages directly out of my blog to write his songs. Of this, I am sure. Chances are, he poked through yours as well for lyrical inspiration. He’s that good.

The elder statesmen of this year’s tour, you can’t go to Warped and not see an iconic punk band like Dropkick. There’s a number of reason these guys have remained relevant to punk for well over a decade, the least of which being that they’ve been playing music together longer than some of this year’s attendees have been alive. (Aug. 11 only)

You may not realize it, but you definitely know all the words to every one of this band’s singles. I promise, you do. And those same songs (along with all their others) are infinitely more fun to sing along to live, campfire-style with a few hundred other Motion City fans. (June 25 and June 27 only)

If listening to Rocket Summer frontman Bryce Avary work his magic behind a mic doesn’t brighten your day and get you stoked on life, you might be beyond the help of even modern science. Positive and inspiring guitar-pop that never feels trite or forced, Avary’s been making infectious feel-good music for years now, and he’s got the skillful musicianship to show for it.

These guys are a bit of an oddball fit for this year’s Warped lineup, even more so than they were last year, which is saying a lot. But that said, they are very much worth your time. Dark and growly indie-punk you’d only find in the seediest of Silver Lake or Brooklyn dive bars, the Florida foursome are the perfect dance-party band for those of us who are actually old enough to legally enter bars.

Another new-school band pulling from older influences, the Rochester fivesome evoke such worthy Warped alums as Against Me! mixed with a Gaslight Anthem-esque classic rock revival vibe. Intelligently written music that’s the perfect soundtrack for your next drinking night with the guys, there’s really never an inappropriate time to be listening to Polar Bear Club. (June 25 and June 27 only)

When the majority of up-and-coming girl-fronted bands seem to have taken to following the aural path of punk rock’s current fiery-haired patron goddess, VersaEmerge have taken to forging their own path. True enough, frontwoman Sierra Kusterbeck is indeed comparably a powerhouse vocalist, but she can turn the grit up to 11 without a second thought when necessary. The band’s new album absolutely kills and serves as a perfect, eclectically influenced example of how to straddle the fence between hard rocking and pop approachability.

These dudes were on Warped back in ’07 as well, during which I had the pleasure of seeing them every day that summer. They were doing some very awesome things with their music and live show even back then, so I’m very stoked to see just how exponentially their skill has grown since I first jumped on their bandwagon. Still true to their melodic pop-punk roots, the Tallahassee natives have stepped up their game to epic, grown-up anthemic rock levels these days.

Despite their sparkling melodies and pitch-perfect production, one thing that Alkaline Trio is not is pop-friendly, which I mean in the best way possible. Frontman Matt Skiba’s signature crooning is anything but bright and sunny, opting more for dark, melancholic and haunting, despite each of the band’s songs being anthemic, sing along-worthy jams. Also, even in 500 percent Florida humidity, they’re still the best-dressed dudes on the tour. So, of course I like them.

What with all this melody and slick production you’ve read about thus far, it’s about time we discussed something on the far opposite end of the spectrum. The New Jersey fivesome are not melodic, and they’re not catchy. They are not danceable in the slightest. Unless you like hardcore dancing or whatever, but let’s hope you’re not that person.

What they are, however, is brutal. Frenzied, chaotic, concussive and “WTF” also come to mind. All of which adds up to sheer awesomeness. If this dance-pop business isn’t so much your thing, a 25-minute set from Dillinger will provide more than your necessary daily intake of both thrash and shred.

Another band of long-standing Warped vets, the Rejects are that mainstream band who are like the semi-guilty pleasure that everyone kind of loves, whether secretly or openly. I myself am rather brazen in my love for these dudes, but hey, no judgment one way or another. Not like we don’t all know the words to “Gives You Hell” inside and out. And “Dirty Little Secret.” And “Move Along.” And “Swing, Swing.” And … you get the idea.

Point being, the Rejects are so worthwhile because that infectiousness translates effortlessly from recordings to live performance. Every member of this band has his own unique stage presence and charisma that makes him so engaging while playing. Frontman Tyson Ritter’s boozy bro-charm is near impossible to be sucked in by, making for a communal vibe during their sets that other bands could only hope to capture. (June 25 and June 27 only)

These dudes put on one of the best live shows around, without question. Straight up Southern rock ’n’ roll style hardcore, the ironically Buffalo-native fivesome bring a little fun to their gritty live show. Maybe not so much “fun” in the sense of how, like, the Rocket Summer is fun, but more in the sense that you can tell these dudes like to party.

With a voice channeling a stack of sandpaper mopping up a broken bottle of Jack Daniel’s on a concrete construction site, frontman Keith Buckley is a paragon of badassery amid a sea of dudes busy getting in touch with their emotions.

Despite the air of hedonism they bring to the stage, every member of the band is of the highest skill level with their respective instruments, and don’t know the meaning of the term “holding back” when it comes to playing. They’ll attack a stage until either their instruments break or they pass out, either of which is entirely possible during one of their sets, but the one certainty you have with them is that you’ll get your money’s worth. (Aug. 11 only)