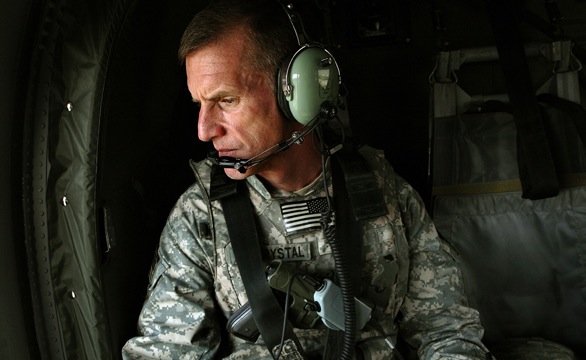 President Barack Obama ousted his top commander in Afghanistan on Wednesday after officials determined that comments he and his staff made in a Rolling Stone magazine article amounted to insubordination.

Obama says he accepted Gen. Stanley A. McChrystal’s resignation and, in an equally stunning move, says he had appointed Army Gen. David H. Petraeus, who once led U.S. forces in Iraq, as his successor.

“War is bigger than any one man or woman, whether a private, a general or a president,” Obama says. “As difficult as it is to lose Gen. McChrystal, I believe it is the right decision for our national security.”

Officials concluded that keeping McChrystal in his job was not a viable option after he and his staff were quoted making comments that disparaged U.S. civilian leaders who oversee the war effort.

In his remarks, Obama emphasizes several times that removing McChrystal was necessary to preserve civilian control of the military and to ensure that the national security team was working together.

“I welcome debate,” Obama says, “but I won’t tolerate division.”

By choosing Petraeus, Obama ensures continuity in the war effort. Petraeus enjoys deep popularity on Capitol Hill, and his nomination is likely to face little in the way of opposition. The president emphasizes that Petraeus had been intimately involved in crafting the current war strategy.

The remarks in Rolling Stone angered the White House and deeply displeased top Defense officials, who have insisted repeatedly that military officers must respect civilian leadership and keep their advice and views private.

McChrystal crafted the counter-insurgency plan adopted by Obama that entailed a sharp increase in troops and shift in strategy to emphasize the goal of protecting the Afghan public and improving the Afghan government’s performance.

But some officials in the administration, most notably Vice President Joe Biden, have advocated different approaches, preferring a strategy that requires fewer troops while emphasizing the elimination of militant leaders and ensuring Afghanistan does not fall under insurgent control.

McChrystal has served as top commander for only a year, replacing Gen. David McKiernan, who was fired by Defense Secretary Robert M. Gates.

By ousting his Afghanistan commander for insubordination, the clash between Obama and McChrystal becomes the most high profile firing since President Harry S. Truman fired Gen. Douglas MacArthur, who was leading international forces in the Korean War.

In 2008, Adm. William J. Fallon was forced to resign as head of Central Command for comments he made in an Esquire magazine article that were interpreted as disrespecting the Bush administration’s policies in the Middle East.

Because McChrystal has direct control of forces in Afghanistan at a critical time in war, his removal is seen as more significant.

As the new Afghanistan commander, Petraeus faces a difficult task to mark progress under the strict timeline laid out by the White House. A planned U.S. troop reduction is scheduled to begin in little more than a year.

The move also comes at a time when the war is widely perceived as going badly. The military has struggled to create a viable local government following an offensive in the southern Afghanistan village of Marjah. And the timeline for the next offensive in Kandahar has been prolonged because of skepticism from local officials.

McChrystal made no remarks in Washington, but the U.S. military command issued an apology on his behalf from Kabul. In his statement, McChrystal says he was committed to the allied forces and that he supported Obama’s strategy.

“It was out of respect for this commitment – and a desire to see the mission succeed – that I tendered my resignation,” McChrystal says.