USA Advances to Round of 16 After Win Over Algeria 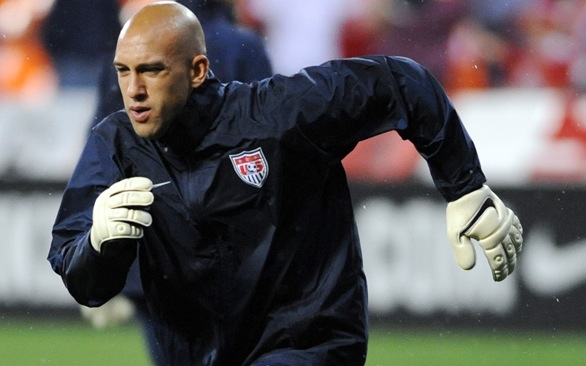 The U.S. men’s national soccer team advanced to the knockout stage of the World Cup after earning a critical 1-0 victory over Algeria in Pretoria, South Africa, on Wednesday, June 23.

“That was a really special feeling,” U.S. coach Bob Bradley said to ESPN.com. “These guys put a lot into it. They never quit.”

Los Angeles Galaxy midfielder Landon Donovan tallied the game-winning goal in stoppage time, seconds before the match came to an end. After multiple attempts in scoring at Algeria’s goal, Donovan connected on a rebound and one-timed a right-footed shot into the lower left corner of the net. It is Donovan’s second score of the tournament thus far.

“This team embodies what the American spirit is about,” Donovan told ESPN.com. “We had a goal disallowed the other night. We had another good goal disallowed tonight. But we just keep going. And I think that’s what people admire so much about Americans. And I’m damn proud.”

USA claims first place of Group C after accumulating a total of five points in three group stage games. The U.S. won one affair and tied two; they will play Group D runner-up Ghana on Saturday, June 26, at 11:30 a.m. PT in Rustenberg, South Africa. Heavily favored in the group, England positioned itself in second place, behind the Americans, having defeated Slovenia 1-0. The English play Germany on Sunday, June 27.

If the U.S. defeats Ghana, they will face the winner between Uruguay and South Korea in Johannesburg, South Africa, on July 2.

Goalkeeper Tim Howard became an essential part of the team’s win. Howard made several saves and motivated the squad verbally most of the time throughout the 90-plus minutes of play.