The Dodger Way with a Yankee Twist 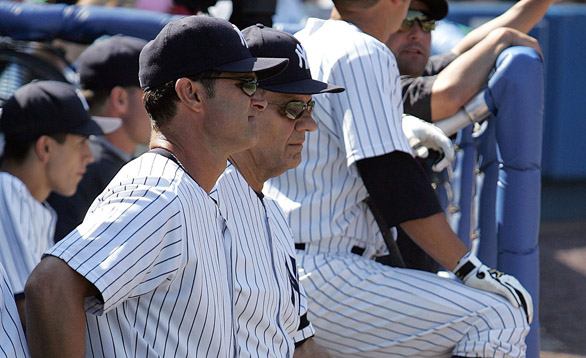 The big story in Dodger baseball last week was the coming of the Yankees to Chavez Ravine and the reunion of Joe Torre with the players he had managed in New York. Torre won four World Series championships, six pennants and made the playoffs every single season in his 12 years with the Yankees. He has repeatedly called the experience the “highlight” of his career, so it was understandable when he described the series at Dodger Stadium as “emotional.” Torre’s every gesture exchanged with his former players was observed and catalogued by an army of reporters who attended the game. Whom did he hug? Whose hand did he shake? What was the quality of the exchange, etc.?

Yet when game time arrived, all niceties were put aside, and the great Yankee-Dodger rivalry took center stage once again. There was an uncommon intensity in the air for a game between clubs of different leagues in late June. But, of course, these are no ordinary clubs. As Torre put it, “These two ball clubs are thought of in the same way, you either love them or hate them.” To go further, if you love one, you probably hate the other.

Granted, “hate” is a strong word denoting a powerful emotion. Yet, it is the only word that can do justice to the pain of that old Brooklyn fan waiting over 50 years to win a World Championship, only to be repeatedly defeated at the hands of the mighty Yankees as the Brooklyn Dodgers were five times before, at last vanquishing their dreaded rivals in 1955. As Dodger fans celebrated the victory, they may also have been celebrating the chance to relinquish the long-held resentment. But old habits die very hard, especially in the game of baseball, and as the current World Champion Yankees continue to dominate the league, so the wellspring of envy spouts its bitter fruit.

It has been over 20 years since the Dodgers last tasted the sweetness of pennant victory. In that time, they have seen their organization in the hands of four different ownerships causing a considerable strain to a sense of continuity. Thankfully, some things haven’t changed. Vin Scully is still in the booth above home plate. Old timers like Don Newcombe and Maury Wills are still regularly in attendance, and that truest of all Dodgers, Tommy Lasorda, still shows up at the games promoting all things Dodger Blue.

No team has ever had a greater booster than the Dodgers have had in Tommy. Nearly 60 years in the organization as a player, manager and outspoken fan, Lasorda has made the organization into some kind of religious faith. Despite the fluvial mass of pro-Dodger propaganda forever flowing from his lips, there is something eerily attractive about his dogma. Besides, Lasorda had the goods to back it up. In his time as Dodger skipper, he won two World Championships, four pennants and a host of division titles. Lasorda could make you believe in the righteousness of what was called “The Dodger Way.” This became more than just an approach to playing baseball. It was a way of life, or so we thought. For years the Dodger Way was associated with the O’Malleys and could be seen in the purity of design of Dodger stadium, the relative lack of advertising and a commitment to excellence year after year. With the O’Malleys, the Dodgers were the last completely family-owned organization, and there was some pride to that. A fan could feel that they were part of the larger Dodger family – and who doesn’t like to be part of a family? The current Dodger PR slogan, “This is my town,” seems a distant relative of that familial impulse felt among fans.

So, like many large families, the hatred – or to be nice, the distaste – harbored for the Yankee organization is a natural impulse in an old family feud. It is perhaps for this reason that to hear Joe Torre repeatedly talk of his time with the Yankees as a “career highlight” is unsettling to those old die-hards. Even more hard to digest is the likely ascendance of Don Mattingly as manager when Torre steps down. Mattingly spent his entire professional career with the Yankees and was a much-beloved face of the organization.

There is only one thing that will put these discomforts to rest. The Dodgers must win. Torre and Mattingly must be a part of a great Dodger renaissance. Only then will the true blue Dodger fan be at peace with the fact that they enjoyed such success in pinstripes. As much as the Yanks are reviled, it cannot be denied that they know how to win baseball games. If the Dodger Way got a little boost from the Yankee tradition of winning, what Dodger fan would complain?