Seychelle Gabriel: The Last Airbender’s Princess Yue comes into her own. 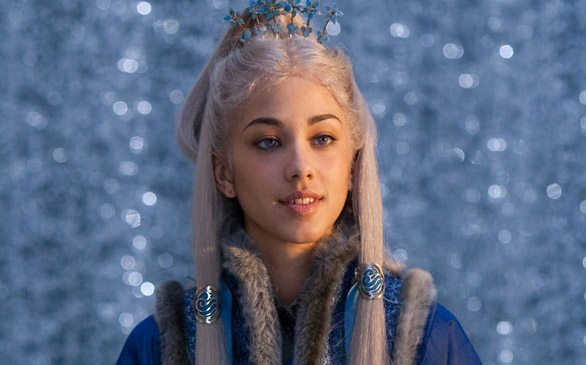 After her roles in The Spirit and guest spots on “Weeds” and “Miami Medical,” this is the first time Gabriel plays a pre-existing character.

“It was cool because there was something to build off of already. And it was one of those things like where you cover a song, but you’ve got the basics. You put your own little life into it, and you can do so many things to it. I could infuse myself into it,” tells Gabriel.

With her biggest role to date, Gabriel admits she’s a little nervous for the film’s release. She thanks her friends and family, though, for being so supportive and easing her nerves.

“I definitely feel the pressure because it’s already got a fan base because of the previous cartoon,” says Gabriel. “There [are] already fans of the character, so I’m hoping they’re gonna like it.”

Gabriel herself is actually a huge fan of Princess Yue’s character.

“I think what’s really cool about her is that she’s a very young leader. She’s trying to figure out how to lead this nation of people,” explains Gabriel.

It is Gabriel’s hope that her character inspires audiences.

“It’s very much a young woman finding her power and sort of coming into herself. I think it’s gonna be really cool for young girls to watch.”

Recently, Gabriel has gravitated towards these types of roles.

“I think there’s something I really enjoy about girls who have strength that they haven’t really found yet, but they’re still in the process of finding. That’s sort of how I am,” confesses Gabriel.

Gabriel also plays Lourdes in Steven Spielberg’s upcoming TNT series, “Fallen Skies.” In the series, Lourdes is a recently orphaned girl from Mexico. While visiting her brother in Boston, aliens attack her entire family. The story follows Lourdes as she is forced to live in a camp with strangers. Instead of going out to fight, Lourdes decides to take care of the children in the camp.

This being Gabriel’s largest role and biggest commitment to television, she’s not shutting any doors just yet and plans to do other things while taping the series.

“This is just the beginning of my career. I don’t want to shoot myself in the foot, so I definitely want to stay open to anything,” says Gabriel.

She grew up in a musical household and was in her high school choir. Though music is where her desire to perform originated, she finds the feeling similar to when she’s acting.

“Deep down I’m more of a musical soul,” admits Gabriel. “But I think they coincide in many respects as far as the performing and the emotional aspects.”

Gabriel’s increasing popularity in the arts world isn’t stopping her from getting her education. She’s attending college in Santa Monica, where she can also perform.

“I’m in this rad vocal ensemble. That’s kept up my singing a little bit,” says Gabriel.

Whether she’s in or out of school, Gabriel continues to enjoy learning about music.

“I just took up the harmonica. I’m getting better at that everyday,” says Gabriel. “I don’t think I go a day without singing or playing something. I think I’d go crazy.”

Though she’s known for a while how to sing and play guitar, Gabriel just very recently began writing. When a friend shared her newest material with Gabriel, she felt extremely inspired by the music. Afterward, Gabriel decided to try out the whole writing thing herself.

Gabriel’s musical roots have also motivated her to someday open a music bar.

“It’s definitely in my future,” boasts the wide-eyed Gabriel.

Unsure if she would ever like to release an album of her own, Gabriel shares, “If I could be acting as an adult and throughout my life, I would love that.”