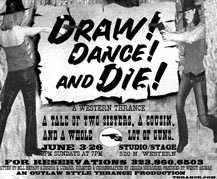 It’s not exactly dance, and it’s not exactly theater, but, hah … Thrance, according to founder Jessica Schroeder, is "a creative hybrid of Theater and Dance."

According to founder of all fine art, Josh Herman, however, Thrance is also a piece of performance art, hence it makes this column.

Still, what does Thrance mean? Well, the best way I can describe their Christmas show is: "It’s like watching a two-hour Old Navy commercial." Shushed by the director, the cast ironically dances to a variety of Christmas songs – i.e., showing the hodgepodge of maladies that befall us during the holiday rush to "It’s the Most Wonderful Time of the Year" (see, but it isn’t the most wonderful time of the year, get it?) Got it? Good, because this show is nothing like that.

You must understand the evolution/etymology of Thrance to understand "Draw! Dance! And Die!" "A tale of two sisters, a cousin, and a whole lot of guns," this Thrance is like Busby Berkeley directing a Quentin Tarantino film while channeling Sergio Leone. In the midst of a shootout, the characters will suddenly break out into tunes by Ray Charles, Elmer Bernstein, The Kinks, Lucinda Williams, Lyle Lovett and Aretha Franklin. Combining dance, theater, performance art and Andy Bakkum, "Die!" has something for everyone (unless you’re like my father and hate dancing, theater and art – in which case, they have a nice concessions stand).