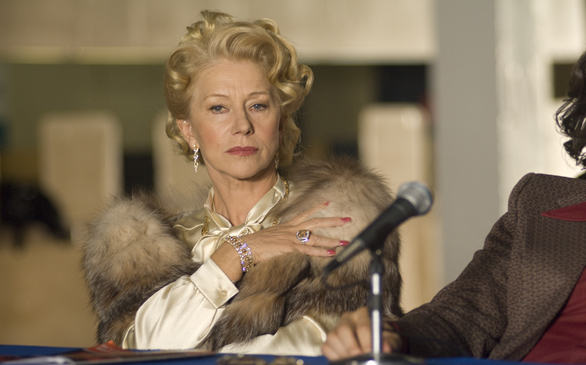 If you’ve ever ventured into the vortex of late-night HBO, you’re probably familiar with “Cathouse,” the network’s docu-soap about the Moonlite BunnyRanch, a brothel in Nevada. But before there were Bunnies, there was the world-famous Mustang Ranch, owned by Joe and Sally Conforte, the first legal brothel in Nevada. Once the largest and most profitable house of ill repute in the state, the Mustang empire eventually fell apart following a string of disastrous events, beginning with Joe’s decision to sign and promote a South American boxing legend he would eventually have shot dead.

Inspired by the wild true story of the Confortes, director Taylor Hackford (Ray, An Officer and a Gentleman) set out to make Love Ranch, casting his wife, Oscar winner Dame Helen Mirren, as Grace Bontempo, the house’s madam. It’s been 26 years since the couple last worked together on their first film, White Nights, and Hackford had been looking for a project they could collaborate on ever since, to no avail. Although he pitched her numerous ideas, she always said no, until he told her about the Confortes.

“When my husband told me the story and told me it had actually happened, I was blown away,” Mirren begins. “I thought, ‘Why have I never heard about this? This is an amazing, wonderful, dramatic story!’ Plus, I thought it was a great role. There are not that many great roles for women, full stop. There certainly are not a great many for women my age. And I loved the fact that my husband wanted to do it.”

But spending two and a half decades finding a project his wife would agree to seemed to be the easy part of getting Love Ranch made. Securing financing was tremendously difficult for the low-budget indie, and Hackford was forced to take on the role of producer as well.

“Taylor was under a lot of stress making this film,” Mirren admits. “He was tough on this shoot. He was not a pussycat. There were days when I was planning how we were going to divide the property,” she laughs, good-naturedly.

But Mirren’s co-stars seem a little more traumatized when the subject of Hackford is raised.

“He’s very – stern,” Scout Taylor-Compton offers after searching for a diplomatic word, while Taryn Manning is far less tactful, saying, “I saw him humiliate some people on set.”

The director admits there were even a few occasions where he went off on his wife, but Mirren chalks that up to professional intensity.

“He was the driving force from beginning to end with this movie; before the script was written, in development, in the financing, the making of the film,” she explains. “Without Taylor, it would not have gotten made.”

Now that the film is finally making its way into theaters, Mirren appeared in New York Magazine to promote the release and encountered a maelstrom of press once the article hit newsstands. The article, featuring “nude” photos of the actress in a bathtub, created such brouhaha, I half expected the 64-year old Dame to be stark naked, riding a unicorn sidesaddle while eating a peanut butter and banana sandwich with Elvis when I Googled the shots.

All the raucous is over a little flash of murky areola under water in a bathtub. A total snooze of a “controversy.”

When asked about the free-for-all the photos had ignited, she waved her hand dismissively and tsked, “I know. Please! Idiotic. What can you do? Those photographs were taken by a very great art photographer, one of the best in Europe. Whenever I work with a really good photographer, I try to give him or her their own artistic freedom because that’s how you get the best work, or, at least, the most interesting work. I gave [photographer Juergen Teller] his freedom, and that was the result. I like the photos because I thought they were naked in the proper sense of the word: I’ve got very little makeup, there’s no elaborate lighting and it’s simple and real. They weren’t intended to be sexy. I think sex and nudity are two different things. People tend to get the two mixed up.”

When asked if she felt that people were upset because the actress is willing to flaunt her body and play a madam past “a certain age,” when most women are fed the propaganda that they shouldn’t be sexualized over the age of 40, she quietly replies, “Well, too bad,” cracks a knowing smile and starts to laugh.