The Kids Are All Right: Julianne Moore dishes on locking lips with Annette Bening. 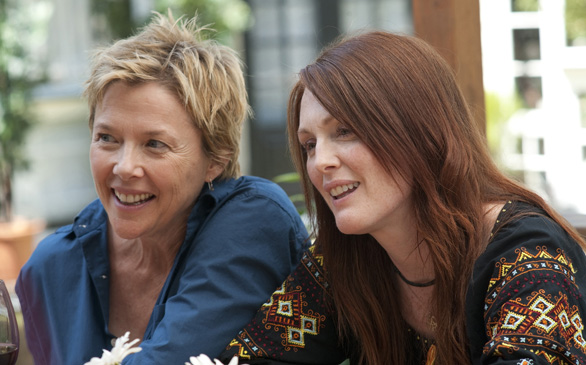 Annette Bening and Julianne Moore star as Nic and Jules in The Kids Are All Right.
(Credit: Suzanne Tenner)

As she enters a coolly elegant suite at the Four Seasons Hotel in Beverly Hills dressed in a forest green and black Isabel Marant silk blouse and sexy, skin-tight, army green jeans, her resplendent mane of red hair pulled into a high ponytail, Julianne Moore’s presence is commanding and entrancing. Looking decades younger than her 49 years, the actress and mother, who’s in town to discuss her new film, The Kids Are All Right, which made a huge splash during its debut at Sundance, is so stunning and regal, it takes a moment to catch your breath. But by the time you have, she’s beaming at you, her green eyes sparkling, offering a kind of giddy warmth as she eagerly dives into the topic of her latest project.

The Kids Are All Right, directed by Lisa Cholodenko (Laurel Canyon, High Art), is the story of two teenaged siblings (Mia Wasikowska and Josh Hutcherson) who decide to find their sperm donor father (Mark Ruffalo) and bring him into the family fold that their lesbian mothers (Annette Bening and Moore) have created. Written by Cholodenko and Stuart Blumberg (Keeping the Faith), Moore has been attached to the project since 2005, after she minorly accosted Cholodenko at a work function.

“I loved her movies so much!” Moore gushes, clasping her hands together and swaying like a 13-year-old taking about Justin Bieber.

“I actually approached her at a Women in Film luncheon and asked her why I hadn’t seen the script for High Art,” she giggles. “She said, ‘I think you were working.’ And I said, ‘I don’t think I was! I mean, I never even saw it!’ I said I’d love to work with her, we expressed our admiration for each other and then she sent me this.”

Moore explains she was drawn to the director’s work because her movies weren’t “event” pictures. Rather, they were character studies about complex relationships.

“Lisa’s [work] is about how people connect, communicate and how they love each other. It’s the kind of film I respond to the most because it’s about human behavior,” the actress says. “What’s so interesting about this movie is it really highlights how important a family is, what a long-term relationship is and what it means to stick it out with somebody, to forgive somebody’s mistakes.”

The film is largely a meditation on family and building family out of whatever you believe in the most profoundly. Since the central relationship is a long-term lesbian couple, there are surely people who might be offended by or against what others will see as a simple human story, but Moore has no interest in the politics potentially raised by the movie. She feels the coupling of two women is just as commonplace as anything else you might see nowadays, both onscreen and in your daily life.

“Films don’t influence culture as much as they reflect it,” she says. “The reason we can have a movie like this is because these are the kinds of families we’re seeing these days. This is not shocking; this is not other; this is not different. One of the things this movie says is to appreciate the family you have, how valuable family is and how much we should cherish it.”

While Moore has her own loving family, including two children with her husband, director Bart Freundlich, the truth is that she spends a great deal of her professional life making out with her co-stars. It begged the question: Where does Annette Bening rate on her long list of onscreen lovers? Because Moore’s had a lot.

“I know,” she grins wryly, “I’ve had a lot! I’m actually doing this Steve Carell movie right now, and I turned to the writer and I said, ‘I think this is the first movie I haven’t kissed anybody in,’ and he said, ‘No, you kiss Kevin Bacon.’ I was like, ‘Oh my god! I DO!’ It’s funny because I’ve kissed so many actors. And actresses. Everybody!” she laughs.

When asked about Bening specifically, she smiles like Mona Lisa and says, “Actors are great kissers, and actresses. That’s our secret; we’re all really good kissers.”

The Kids Are All Right releases in select theaters July 9.