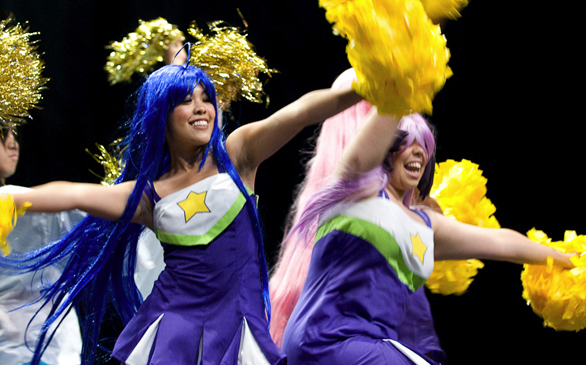 While I unfortunately was unable to attend E3 (thus compromising my 2010 triple crown status), I am attending the other two with much delight. My odyssey begins Fourth of July weekend with AX2010. That’s Anime Expo 2010 for the unaware. It may not be the most mainstream of the set, but its extravagance is not to be taken lightly.

Anime Expo is North America’s largest and most revered gathering of all things anime and manga-related. The convention offers something for every level of anime interest. Casual spectators can catch cosplayers as they pose for pictures showing off their costume-making craftsmanship and, being that it attracts a more dedicated crowd than say Comic-Con, you get a greater concentration of pretty amazing stuff.

Aspiring artists display their work at portfolio revues, you can talk to some of your favorite artists (like bara-chan, whom I’m excited about) and/or attend some of the more specialized panels, including “Breaking In: Working in Animation,” “Manga Inking and Papers,” “Coloring with Photoshop,” Copic coloring, Prisma markers coloring and probably some other kind of coloring that I’m not familiar with. Panels on voice acting are also scheduled.

All in all, it’s a great place to network for those looking to get into the industry because every major company in the industry has a presence there. I’d have to say that the most fun is had by the otaku (fans of anime) as the myriad of panels, concerts, screenings, competitions and discussions that are planned throughout the four-day event could possibly be overwhelming for the casual anime appreciator in the best (and most frustrating) way.

Last year’s expo saw the debuts of the English dub of Evangelion: 1.01 You Are (Not) Alone and Gurren Lagann the Movie: Childhood’s End well before their limited American theatrical releases. And this year is no different with scheduled debut screenings of the third installment of Black Lagoon (Roberta’s Blood Trail) and the U.S. premiere of “Eden of The East.” The series’ creative team has worked on Jin-Roh: The Wolf Brigade, “Ghost in the Shell: Stand Alone Complex,” Blood: The Last Vampire and many other popular shows.

With panels from FUNimation, Production I.G, eigoMANGA, Gaia Online, “Avatar the Last Airbender,” “Gurren Lagann,” VIZ Media and many others, there are sure to be more than a few exclusives for your viewing pleasure.

Panels aren’t the only entertainment, though. Some of Japan’s most popular musical acts are also performing, and this year the shows are in the Nokia Theatre. If you’re a fan of “Macross Frontier,” then you should be familiar with its chart-topping theme song by May’n. She sings on Friday afternoon (July 2) with Megumi Nakajima. Singer-songwriter Mell also performs on Friday, during the evening. She is responsible for the theme songs of several anime, including “Black Lagoon,” “Shakugan no Shana” and “Hayate the Combat Butler.”

Nokia Theatre also hosts the all-girl idol group AKB48. Sixteen of the 48 members of AKB48 who form the special Dream Ambassador team are this year’s guests of honor and perform on Thursday (July 1).

Don’t worry, ladies, there are some men gracing the stage this year as well. Japanese Rock group Sophia celebrate their 15th anniversary stateside on Saturday (July 3).

If you’re more of the active type and want to participate in some of the festivities, the other main events are competitions. There’s a battle of the bands and AX Idol competition (think “American Idol” but with a voice-acting element). And, the most popular event of all every year is the masquerade. The best and most courageous cosplayers take the stage to compete and entertain the crowd.

If you can’t make it down to the L.A. Convention Center, I’ll be taking plenty of pictures for you, and they’ll be up at campuscircle.com/photogallery next week.