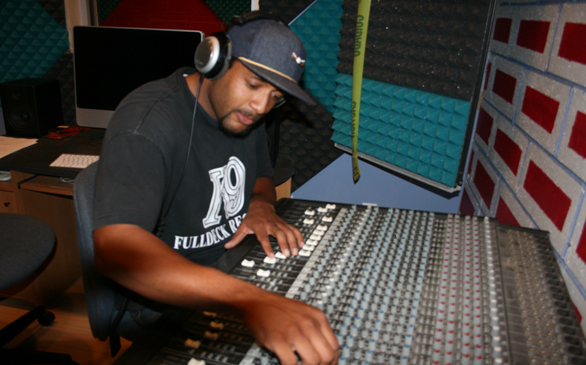 On June 15, 2010, the Salvation Army Compton Corps Community Center had a musical showcase to celebrate their opening a recording studio on the premises for the benefit of the community. The recording studio is for local kids to showcase their talents and actually have a viable way to get their names and creative expressions out to the public.

In addition to offering a recording studio for children to tap their inner creativity and showcase their talents to their peers, kids also have the opportunity to stay fit and athletic with a basketball court, volleyball equipment and a playground. The gym also contains scoreboards donated by the John Wooden Center on UCLA’s campus.

The opening of the studio was celebrated in style with Hip Hop for Hope’s first musical showcase and an art exhibit dedicated to Captains Martin and Tory Ross of the Salvation Army Compton chapter. The musical showcase debuted the talents of not only children who have prospered because of this awesome opportunity at creating in an actual recording studio, but it also featured artists who generously dedicated their time for this great cause. Justified, a Christian hip-hop group consisting of a husband-and-wife team, performed, as did a rap trio called the Kollective, who had a large fan base.

No one, however, compared to the allure of Lil Niqo, an 11-year-old rapper who has quite a following. His performance had the maturity of someone thrice his age and kept the audience’s attention throughout. He was able to hype the crowd, which seemed fascinated by the sight of a kid no more than three-feet tall carrying himself as though he were 12-feet tall.

The highlight of the night was a gospel singer named Mercedes, who wowed everybody with her vocal capabilities. She is a product of the community and one of the first artists to record in the new studio.

When asked how this would impact the community, former Advisory Board President Dr. Mickey Ross responds, “This is an eclipse of monumental proportions because when an eclipse goes away, the sun comes burgeoning through like nothing you have seen before. You cannot even look at it. And I see the promise in what is taking place in the Salvation Army Compton Corps is just amazing. They have already proven themselves, and they are proactive in making a difference in the community from the standpoint of providing food for the homeless, and they’ve already made a difference in providing a gymnasium floor, goals and clocks. They have also expressed interest in a charter school, so that they can establish the health, the education and the general welfare for the under-served, the underprivileged and the undereducated. They are making a tremendous difference, and people are coming out. We are seeing hope, deliverance, the meeting of personal needs and collective needs of the community.”

Dr. Ross states, “Look at how hip-hop affects the world. When I was sitting there tonight, looking at these performers, I said, ‘We don’t realize we are watching the future in the next five, 10, 15 years, coming out of Compton.”