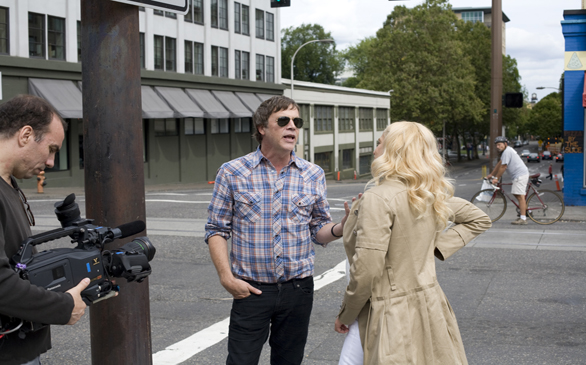 Todd Haynes on the set of Great Directors

Hollywood continues to keep its actors in the limelight, but often for the public the unsung heroes are the men and women behind the planning and creation of a film.

Martin Scorsese and Steven Spielberg are among the luckiest ones who seemingly win with audiences nearly every time. Their few film mishaps get mysteriously overlooked. What about the other directors who create masterpieces but also throw a few flops into the mix as well?

Great Directors doesn’t shy away from the failures. It presents the good, the bad and the ugly. The film doesn’t pretend that these directors only created award-winning blockbusters with record-breaking sales.

In Great Directors, filmmaker Angela Ismailos sets out to give recognition to some of the greatest living auteurs of all time.

Imagine not only meeting your top 10 lifetime idols but being allowed to sit and chat with each of them about your shared passion. Imagine if among those 10 were Stephen Frears (The Queen) or Richard Linklater (The School of Rock).

One of the most beautiful elements of Great Directors is that there is no single setting. Each of the 10 directors is interviewed in a separate space, which gives the film real character.

Also Ismailos’ favorite directors are not all American. She travels the world and interviews a diversified clan in charming and scenic places. There are also subtitles for some of the directors. The change in accents, languages and locations all make for an aesthetically stimulating documentary.

While celebrating the works of geniuses, Great Directors is like an advertisement. Though it does so tactfully. It isn’t necessarily promoting the films, but when it shows a suspenseful or a knee-slapping Ken Loach clip, you certainly leave the theater itching to see more of that particular movie.

Great Directors distinguishes differences in making a film for the love of the art and making it for the love of money. According to the directors, there is a clear difference. Sometimes artists have to make the more commercial and less artistic films to put food on the table so they don’t starve while making the meaningful or groundbreaking films.