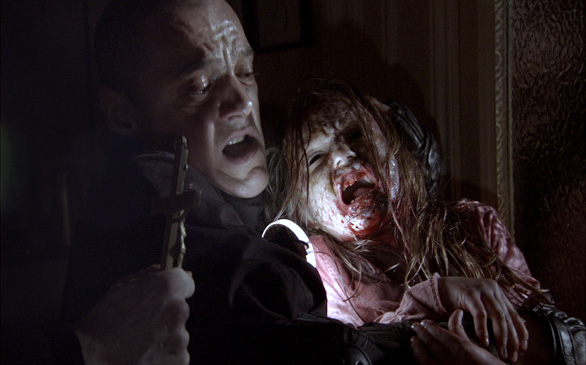 There are only a handful of moviegoing experiences that can really compare with seeing a good old-fashioned scary movie in a packed theater. Paranormal Activity proved the success of this formula, and [REC] 2 provides a fantastic example of taking this formula to the next level. The film is intense, frightening and altogether extremely scary but with an aura of Spanish flair that enables it to seemingly go places Americans wouldn’t dare.

[REC] 2 was released internationally in 2009, but Magnet Releasing apparently has some faith in the success of a subtitled, cinema verité stylized roller coaster ride of a film. If this sounds strange, it really isn’t, as [REC] 2 has more in common with last year’s hallelujah moneymaker Paranormal Activity than most other modern horror movies.

In fact, [REC] 2 is a Spanish sequel to [REC], which itself was remade shot for shot as Quarantine. But this is beside the point. [REC] 2 picks up minutes after the first ended, a story that followed a news crew as they tail a firefighting crew into what is apparently believed to be a domestic abuse report.

Instead, they find that the residents are a bit more … aggressive as they try and find their way out. This movie follows a similar approach, following a SWAT team as they follow the orders of a mysterious man who may or may not have the answers they are looking for.

If this sounds at all complicated, take a breather. [REC] 2 is as simple as it comes. The film is more or less a live-action video game, one that utilizes a Blair Witch handy cam format to surprise us with damn near anything as the team fights against this, shall we call it, zombie outbreak.

But this is all beside the point. One will go into [REC] 2 because they have heard it is scary, and rest assured this is one of the scariest films released in some time. It is violent, bloody, intense and horribly unpredictable. Though it is indeed quite the cliché, [REC] 2 is a roller coaster ride. It is short, fast and wild and most certainly not for the faint of heart. For those that have the balls to see this movie, bravo. To everyone else, we can’t blame you.