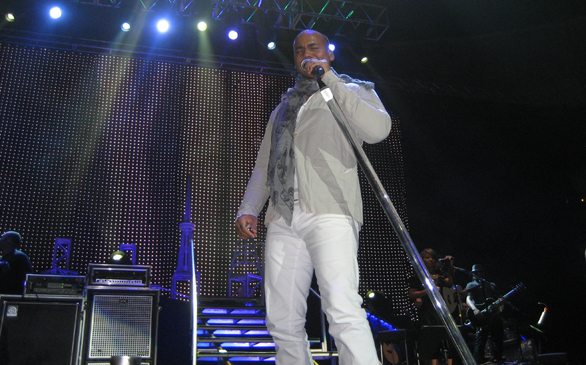 Neoteric Bachata ensemble Aventura made another stop in Southern California, but this time it was in Anaheim. A quartet, Aventura is currently on a second tour throughout the United States due to their tremendous career success and latest album, The Last. This is the group’s third stop in SoCal in less than a year, having performed at Staples Center in December of 2009 twice.

Led by songwriter and vocalist Anthony Santos, better known to the public as Romeo, Aventura presented their urban and hip-hop Bachata to their audience. Immense crowd pleasers of the night consisted of “El Malo” (The Bad), “Noche de Sexo” (Night of Sex) and “Dile Al Amor” (Tell Love).

Although the spectacle neared three hours, the public stayed until the end as Romeo performed a variety of songs from their early days in 1999 until today. Such hits included “Obsesion,” (Obsession) “El Perdedor” (The Loser), “Un Beso” (A Kiss).

Aventura is a classic example of the American Dream. No one believed in them in the early 1990s. This was a group that received heavy criticism in the start, but these Bronx natives were determined to jump into the music industry with the then-innovative genre they evolved.

Indeed, Aventura is a must-see performance at any given time and anywhere!