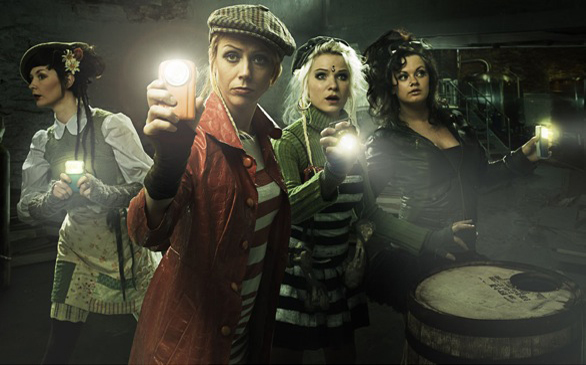 There are two definitions of the word katzenjammer befitting of this brief segment of praise: 1) A feeling of discomfort such as following a night of drinking, ie. hangover and 2) An uproar, a noisy clamor. The ladies of Oslo, Norway’s Katzenjammer make one hell of a clamor, and their music evokes the sounds of ancient raucous European bars, pirate ships, three-ring circuses … essentially free-spirited, delirious fun made aural.

Despite the instrumentation, there’s a strong punk flavor to Katzenjammer’s theatrical flare. Think world folk à la the Pogues with a feminine edge. These bad girls rock the balalaika, the accordion, the glockenspiel, the trumpet and even the obscure theremin like nobody’s business. Not only that, but they’re all astonishing vocalists, contributing to intricate harmonies while Solveig Heilo and Marianne Sveen trade off on mind-blowing lead vocal acrobatics.

Their debut album, Le Pop, is strong from start to finish, rife with fanciful tall tales and magic tinged recounts of every day moments.

“A Bar in Amsterdam” likens anticipation of mayhem like a building storm, “like a vein full of rain to the hearts that should fight,” while Demon Kitty Rag is sassy and menacing with Sveen’s Ella Fitzgerald-worthy improv skipping along playfully when she’s not busy growling out the verses.

“Tea With Cinnamon” is sweet, light and playful, in stark contrast to “Hey ho, on the Devil’s Back,” which as might be expected is a tale of selling one’s soul to Old Nick, but manages to not sound tired and clichéd.

“Wading in Deeper” sees the ladies mellow out a bit, but in the way that Nick Cave does mellow … there’s nothing altogether relaxing about suicide after all. The album’s title track serves up fun mob-style vocals with tongue-in-cheek nods to the group’s influences: “You sell tickets to a funeral, ’cause you need tickets to the Cramps.”

“To the Sea” is a gypsy maritime gem, this time with Anne Marit Bergheim on lead vox with a soaring chorus. Turid Jorgensen takes her turn at lead on the album closer “Mother Superior,” an Old World lament that recalls closing time at a tavern in Italy.

Few groups show such remarkable talent, diversity and frenetic intensity on their first venture out. This is a bold and exceptional not-to-be missed debut.