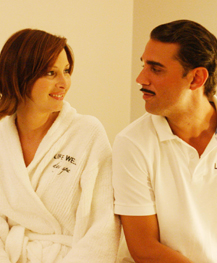 The Independent Spirit Award-nominated film Down in the Valley will open this year’s Los Angeles Film Festival on Thursday evening, June 16. Screening at the legendary Cineramadome with a gala to follow at Los Angeles’ landmark Hollywood Palladium, the film, directed by David Jacobson (Dahmer), stars Evan Rachel Wood (Thirteen) and Rory Culkin (Mean Creek) as a troubled brother and sister living on the outskirts of the seedy San Fernando Valley. Their world is changed, though, when a delusional man who believes he’s a cowboy (Edward Norton) enters their lives.

Two big films screening at this year’s fest are Rodrigo Garcia’s Nine Lives and Don Roos’ Happy Endings. Nine Lives, which stars Kathy Baker, Glenn Close, Dakota Fanning, Sissy Spacek and Robin Wright Penn, among others, examines nine different characters at emotional crossroads in their lives. Happy Endings, starring Tom Arnold, Jesse Bradford and Lisa Kudrow, will close the fest on Sunday evening, June 26, with a screening at Mann’s National Theatre in Westwood. The film, from the director of The Opposite of Sex and Bounce, is a piece that weaves together multiple stories in order to create a clever look at love, life and family.

Other films of interest screening at this year’s fest are 2046, The Beautiful Country, Me and You and Everyone We Know, March of the Penguins, Rize and Nearing Grace. The fest will also play host to its usual "Coffee Talks" series, as well as a handful of showcases screening competitors in the high school, shorts and documentary categories.

For more information about the fest and purchasing tickets, call (866) FILM-FEST or visit the fest’s Web site at www.lafilmfest.com.