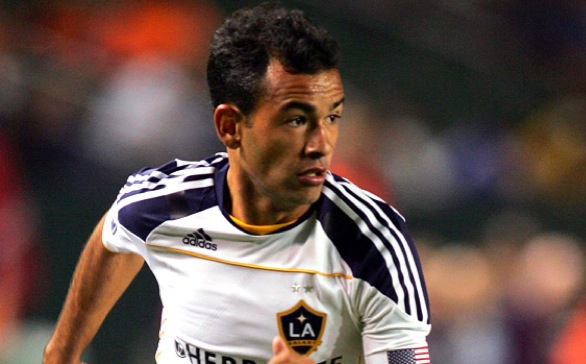 Both Landon Donovan and Edson Buddle returned to the Los Angeles Galaxy Sunday after competing with Team USA at the World Cup in South Africa.

Buddle scored first in the Galaxy’s eventual 3-1 victory over the visiting Seattle Sounders at the Home Depot Center. The striker found the back of the net for his league-leading 10th goal in the 19th minute of play, as he headed the ball from seven yards away. Donovan registered his 10th assist, which is an MLS best.

“That was the way I wanted to start,” Buddle states to YahooSports.com. “I wanted to get a goal, especially coming back. I feel like every day you have to prove yourself.”

Three minutes after the second half began, Brazilian midfielder Juninho netted his first career goal from 40 yards out on a potent right-footed shot. Juninho drove the ball to the upper-right corner of the net for the beautiful result. Much talk has sparked already that this has potential to be the goal of the year.

The Sounders cut the lead to one in the 66th minute, but it was not enough as forward Alan Gordon collected a score 11 minutes later when a through-ball bounced off a Sounder defender and into the back of the net.

Los Angeles carries the best record in Major League Soccer with an 11-1-3 mark. They next play Wednesday, July 7, in Washington as they visit the Seattle Sounders for a 7 p.m. kick-off.