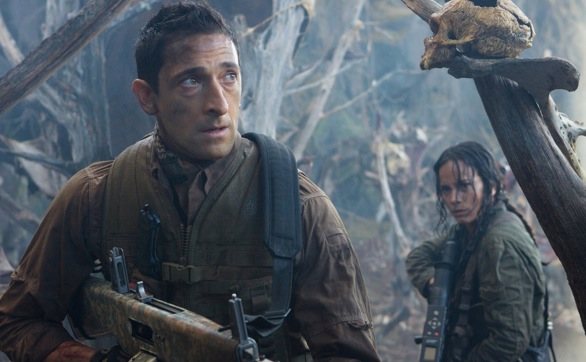 Since the classic first Predator film was released in 1987, it has trudged down a long, sloping road toward embarrassing mediocrity thanks to Predator 2, Alien vs. Predator and the bastard stepchild in the attic, Aliens vs. Predator: Requiem.

In an attempt to reboot the franchise, producer Robert Rodriguez teamed up with director Nimród Antal (Vacancy, Kontroll) to make a film they hope will be what Aliens is to Alien, hence the additional “s” in the title. Both are admitted Predator fans who recall in detail the first time they saw the Schwarzenegger vehicle.

“I remember going to [the original film] with my brother,” Rodriguez begins. “We went to see it thinking it was a Commando-type movie, and I remember the audience reaction [halfway through]. They were kind of confused when it turned sci-fi and horror. Everyone was a little like, ‘Wow, what the hell was that movie?’ And it just caught on and caught on and kept growing in popularity. There was something very unique about it. It inspired me to do mixed genre features later.”

“14 years old, Avco on Wilshire, [four of my best friends from junior high] and I, and I walked out going, ‘Whoa!’” Antal counters. “And the day my agent called and said I was going to be directing this movie, I was reunited with those guys after 15 years. I was in a restaurant with them. True story.”

Having been intensely influenced and captivated by the film as teenagers, they approached the material with nostalgia, reverence and verve.

“We always started with the original film,” Antal insists. “We wanted to make something the fans would appreciate, but would stand on its own without aping [the original].”

That meant no Schwarzenegger, who, Rodriguez laughs, wouldn’t have been available anyway since he was busy being the Governator. Hunting for a lead actor who could shoulder the weight of the genre piece, they stumbled on an unlikely pick: Adrien Brody. “It seems, on paper, an odd choice, but it really wasn’t,” Rodriguez shrugs.

Brody was initially offered a supporting part, which would later be cut from the script, but the actor said he was more interested in playing the lead.

“His passion was so refreshing,” Antal continues. “To see someone of his caliber really want something as bad as he did was awesome. He came in saying, ‘I want this! I’ll fight for this. I’ll prove you guys wrong if you have any doubt.’ That was bitchin’.”

Asked what drove his desire to step into the lead role of a franchise like Predator, Brody, who speaks with both lulling calm and sharp exactitude, replies, “It’s surprising to me when people are surprised by my choices. As an actor, I made a conscious decision to not repeat myself so that I keep the process interesting for myself and the people who have seen my work. I looked long and hard for an opportunity like this.”

Brody admits it wasn’t easy to secure the endorsement of a movie studio, but thanks to Antal and Rodriguez’s support, he landed the role and kicked off intensive preparation that included a restricted diet, heavy weight lifting for the first time since college, books on Buddhism and by ancient military strategist Sun Tzu as well as “pouring over military manuals and field guides.”

He says he did “as much as I could to create someone who has a sense of control, awareness and ability to not let fear that would naturally ensue paralyze him actually propel him into being a warrior. I [tried to] harness everything in my power to be ferocious.”

As the movie arrives in theaters, Brody views his work in the film as “a big coup.”

“I’m very protective of this material because I’m a fan of the original. I’m also respectful to fans and wanted to give them what they wanted and, hopefully, elevate the material as well,” Brody says. “I’ve seen it once and was kind of awestruck at both loving the film and simultaneously being so proud to be in it. It brought me back to being a child and being like, ‘I love this fucking movie.’ And then it’s me in it. It’s so exciting. It’s a gift.”

Predators releases in theaters July 9.
Article posted on 7/6/2010
This article has been viewed 2084 times.