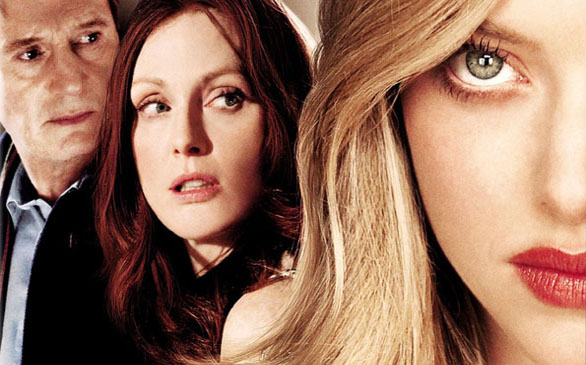 Under the Radar: Julianne Moore and Liam Neeson star in Chloe, the latest from director Atom Egoyan (The Sweet Hereafter). Moore suspects her husband is cheating on her and hires an escort to seduce him and report back. But she soon becomes obsessed with the game.

Why Am I Doing This? is a raucous comedy following the lives of wannabe actors in Los Angeles.

World Full of Nothing is an award-winning festival favorite about a rash of copycat suicides posted on the Internet.

Also available: two with Susan Sarandon – Middle of Nowhere and The Greatest

The Majors: Ben Stiller stars in Greenberg, the latest from writer-director Noah Baumbach (The Squid and the Whale). In maybe his best performance, Stiller plays a stuck-in-a-rut New Yorker who agrees to housesit for his brother in Los Angeles. Once there, Stiller reunites with his old band mate and his ex-girlfriend, but finds himself falling for his brother’s assistant.

The Idiotbox: Joel, Mike and their robot friends return for another round of ripping on dated sci-fi schlock in Mystery Science Theater 3000: XVIII. The masterpieces include: Lost Continent, Crash of the Moons, Jack Frost and The Beast of Yucca Flats, starring Tor Johnson of Ed Wood fame.

After convincing the police that he is psychic, a slacker with powers of observation (James Roday) starts a P.I. business in Psych: The Complete Fourth Season. Guest stars include James Brolin and Rachael Leigh Cook.

A dysfunctional clan of redneck, land-dwelling squids are at the center of Adult Swim’s Squidbillies: Volume 3. The hard-drinking good ol’ squids contend with the effects of steroids and the oldest living confederate widow in these 10 episodes.

A shotgun wedding brings together two disparate families in the British class satire A Bit of a Do: Complete Collection. David Nobbs (The Fall and Rise of Reginald Perrin) crafted the award-winning comedy.

Stranger Than Fiction: Eight contestants attempt to break the five-day record for nonstop movie watching and win $10,000 in A Million in the Morning.

Comedian Stephen Fry traverses the globe, documenting animals on the verge of extinction in the BBC series Last Chance to See.

Please Remove Your Shoes is a thought-provoking documentary, which asks if we are really any safer now than before 9/11. It includes interviews with FAA insiders and congressmen.

Blu Notes: Predator: Ultimate Hunter Edition hits hi-def. Arnold leads a team of commandos on a rescue mission, but an invisible enemy is picking them off one by one. The disc features a new digital restoration and commentary by director John McTiernan.

Also available: Parasomnia, How to Make Love to a Woman, Eyeborgs