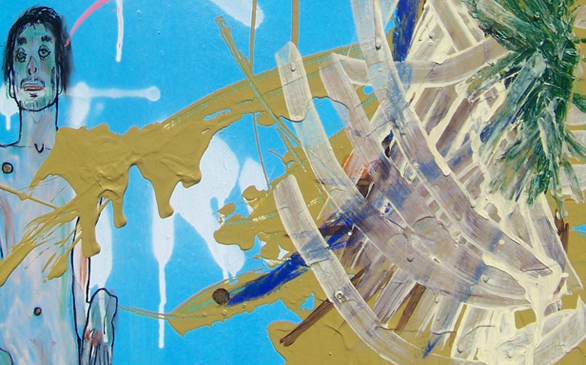 Imagine waking up one bright, early morning to a loud pounding on your door. Startled, you arise out of your slumber and labor out of bed, but before you can attempt to gain your composure, the police burst in with guns drawn and search warrants in hand. Before you begin to question what is taking place, you are handcuffed, taken into custody and placed in the back seat of a police car. Most people’s first rational thought would be, “What is going on? What could I have done to warrant this?”

It took three days in a jail cell in Twin Towers Correctional Facility in downtown Los Angeles for Cristian Gheorghiu to get an answer to these questions. Gheorghiu was finally informed about the nature of his incarceration and that he was held because of his former affiliation with a graffiti crew called “MTA.” Even though he had severed his ties with MTA in 2003, the police based their 2009 arrest of Gheorghiu on this single previous association. It is baffling as to why Gheorghiu was taken into custody without any evidence or solid proof that he was among the group of graffiti artists that created a 100-meter wide mural along the Los Angeles River basin. After being cut loose from custody, Gheorghiu was threatened with harsh restrictions in an attempt to stifle his creative process. Cristian Gheorghiu, also known as Smear, is a Los Angeles native by way of Romania. Born in Bucharest, he journeyed to America with his family at the age of 5. Gheorghiu has made the City of Angels his home, his heart and his launching pad.

Growing up in this sprawling metropolis during the 1980s, the city has helped in cultivating who he is as a person. An avid reader and history buff, he dabbles in art forms and literary works that most dread reading during school. Gheorghiu enriches his life through this constant learning, never ceasing to expand his knowledge by always reading, taking in new information and studying every imaginable artistic form.

His persona and artworks do not fit into the typical mold of what a graffiti artist is perceived to be. For many observers, graffiti is not an art form, but an eyesore and a great nuisance to the community. To graffiti artists, it is an opportunity to broadcast their feelings, creativity and artwork to the world, and some create works that do not involve the defacing of public works. There are a select few who can break away from this typecast of being a graffiti artist to being labeled a true artist.Transforming from a graffiti artist to painter, Gheorghiu possesses rare artistic abilities most strive hard to obtain during their formative years in school. His aptitude in the arts is very clear to those who have seen his artwork.

“I’ve taken classes at LACC, and even my teachers told me, ‘I don’t think you need to be in school. You’re already an artist. I don’t know if the curriculum will benefit you much.’”

His artistic abilities are beyond apparent to those who have had a chance to view his work on the streets as well as in galleries. Some of his previous solo exhibitions are From Immigration to Integration at the Museum of Ventura County and I’m Tired of Being Sexy at the Lawrence Asher Gallery in Los Angeles.

Becoming a self-taught painter is not an easy task to undertake, and Gheorghiu understands the self-discipline and determination that is required to broaden your horizons as a painter.

“A lot of the techniques I learn from art books: oil painting books, acrylic painting books and sketching books. I also get books on artists I like and look at their books to study their techniques and learn while getting inspiration from them.”

Drawing inspiration from various muses, his artwork is multifaceted and multi-medium based, relying not just on acrylic paints, but also house paints, pastels, oil-based paints, spray paint, found art, collage and any imaginable creative medium. Gheorghiu’s current exhibition Cream of Meat debuts at the Buckwild Gallery in Venice (12804 Venice Blvd.; buckwildgallery.com) July 24, with a reception from 6 p.m. until midnight. His work is on display until Aug. 4.