Molotov: …Light the Rag and Burn it Down 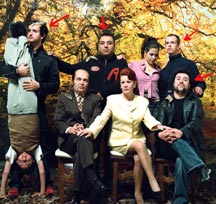 Molotov has been around the world, from their home base in Mexico City to Europe and all through South America and the States. Their relentless touring with headlining acts such as Metallica, R.E.M. and the Deftones, has established them as a powerful rising force in the rock world, and their three albums of Beastie Boys-esque hip-hop fused with a classic rock groove and a punk rock attitude have earned them both praise and protest at home and abroad. Their lyrics, delivered in both Spanish and English, deal with everything from guzzling beer at house parties to taking on corrupt politicians and their political parties.

"There are a few songs that have kind of stirred up things," says Molotov’s drummer and vocalist, Randy "El Gringo Loco" Ebright, who moved from New Orleans to Mexico City in 1992. "One would be ‘Give Me the Power,’ which talks about what was then called the ‘regent’ of Mexico City, kind of like the mayor. From that song, we got banned from a few record stores. In Mexico, most of the money is controlled by few of the people, and most of those people have lots to do with the government, so the owners of those record stores refused to sell the record (the band reportedly took to the streets to sell the album on their own). In Spain, we had a penal lawsuit filed against us, but that was dropped in court."

"When you’re sitting at your house writing," he continues, "[it’s] no-holds-barred. People are going to interpret your songs the way they want to, people get offended and their feathers get ruffled. The responsibility as a songwriter goes as far as explaining what you’re thinking when you’re writing something. But people’s reactions are pretty much out of one’s control."

It’s been eight years since Molotov’s somewhat accidental conception in mid-‘95. According to Ebright, who joined shortly after the group was formed, "Molotov formed as a side project for a battle of the bands kind of contest, and they won that contest. The promise they [made to each other] was that everybody would leave their normal projects and dedicate their time to Molotov. But that didn’t happen, so I got into the group in October and Paco (Ayala, bass/vocals) [joined] in February ’96."

Since then, Ebright and Ayala, along with Tito Fuentes (guitar/vocals) and Micky "Huidos" Huidobro (bass/vocals), have released three albums, and February 25 marked the release of their fourth, the highly anticipated Dance and Dense Denso (Universal). Last year, while on a "break," they collaborated with the Dub Pistols for a track on the Y Tu Mama Tambien soundtrack, as well as taking time record a cover of Tone Loc’s "Funky Cold Medina" for the Bite Out Of Rhyme compilation.

Their debut album, 1997’s ¿Donde Jugaran las Niñas?, secured them a Grammy nomination and garnered them a platinum record. Not ones to back down from the surrounding controversy that stemmed from the lyrical content and the suggestive cover, the group gained momentum from the uproar and allowed the brouhaha to push them even farther. Molomix, which was composed of a few unreleased tracks and re-mixed versions of previously released songs, came a year later, followed by Apocalypshit in ’99.

Towards the end of 2001, the band decided to take some time off to compose Dance and Dense Denso. "Actually, we had too much time off," says Ebright, "We ended up composing about 35 songs and during pre-production, we narrowed it down to fifteen. In the mixes we decided to just stick to eleven songs. So the options were there, and we got a really good cut. Every song has its own thing. The whole record is based around guitars. The last few records were mostly bass and drums, but this is focused on guitars and it’s a lot rawer sounding."

With song styles ranging from the title track’s riotous speed-punk, to the darker, stripped-down grooves of "No Me Da Mi Navidad (Punketon)" and "Hit Me (Gimme Tha Power II)," to the straight hip-hop of "I’m the One," Molotov avoids a disjunctive hodgepodge of sound and successfully sustains their feel. Yet they are still able to genre-hop better than just about any other rock/rap/metal/punk outfit around. "A musical free-for-all is probably the best way I could put it," says Ebright, "There’s a lot of different styles on the record, so even composition-wise, I guess we’re free-for-all."

"The backbone of the group is just to have fun doing what we’re doing," he continues, "and being able to kind of get everything out as far as ideas, lyrically and musically. Collectively, we all like the grandfathers of rock, the Beatles and Elvis, and older metal like Led Zeppelin and Black Sabbath. Also newer stuff like the Clash, the Sex Pistols, the Ramones. We take bits and pieces from lots of different types of music, like Public Enemy lyrically [and] the Beastie Boys, musically."

What’s the best part of being in Molotov? "Being able to be creative, having fun and playing with my friends," admits Ebright. "And being able to get paid for it," he adds.

For Ebright, the toughest aspect of band life is looming. "We’ve got a tour coming up for this record, and me and my wife just had a daughter. It’s going to be tough leaving her," he states. "It’s usually two or three months, then you come back for about a week, just enough time to do your laundry and get divorced, and then you have to go out on the road again."