Vibram's FiveFingers: A Glove for Your Feet 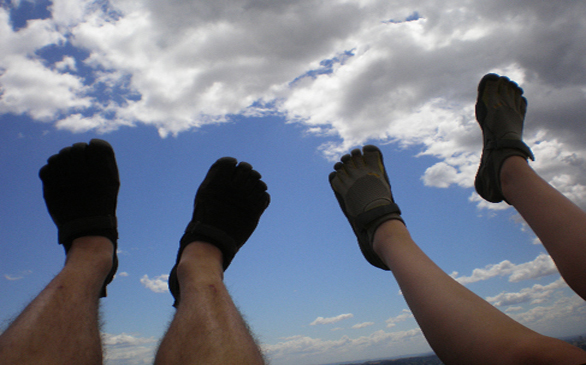 As humans, we have the ability to walk upright, use an opposable thumb and traverse the globe however we see fit. But for most of our modern existence we have taken away one aspect that was given to us right off the bat – using our toes.

Think about it for a moment. How often do you actually use your toes? I’m not talking about picking things up from the ground because you’re too lazy to bend over, but the true functionality of the toe system in your feet. The spreading of the foot and simultaneous reach of the 10 digits below your knees offers much more than a sturdy platform to stand.

By using our whole foot and including the toes, the human body allows itself to walk as it was intended, with no sloping of the foot and keeping a straight alignment of the back. When running, the toes offer additional strength to the foot and in turn more speed and better dexterity. With this in mind, it shouldn’t be a surprise that the latest craze in footwear is taking hold with a serious grip.

Vibram’s FiveFingers is like a glove for your feet, with tread included. A variety of styles are offered to allow you to pick the one that best suits your needs. They aid in everything from yoga to hiking in the mountains.

I picked up two pairs and had a female version sent to my friend Louise so she could try them out, too. We both had the same thoughts about putting them on; it’s tough at first. But with a little finesse they slide on and fit quite well.

The first test was taking out the KSO male and female versions on Fryman Canyon in Studio City.

“Having the freedom and usage of all my toes was extremely comfortable,” Louise says. “The shoes are also very pliable and move with your foot versus normal women’s track and hiking shoes that give a lot of stability but have no movement.”

The trek we took was fairly moderate on a rocky dirt path. I could feel the rocks below my feet, but instead of being in pain, it actually massaged them and didn’t affect my experience at all. But to really test out these new kicks we wanted to put them to the test, so...

The next day Louise and I went to Runyon Canyon and ventured off the main loop to take on the spine that leads to the very top of the hill. It was her idea to go for it and I followed cautiously, but as soon as we got moving through the loose rocks and steep cuts in the earth all the trepidation vanished.

Louise led the way, flying right up the side of the mountain.

“The movement I had wearing the shoes gave me much more balance and dexterity,” she explains. “I was able to climb steeper trails and grab on to rocks that I wouldn’t normally have been able to. I have a bad back, and didn’t know how the Vibram shoes would affect it, but for one of the first times I had no back pain after a long hike.”

By the time we got to the top, our feet felt great and with some astonishment, I looked back to see what we just did. On this trail I had used the other pair that I had: the KSO Trek. This is the hardcore version of the shoe. Instead of a smooth firm surface on the foot, it’s a thick, mountain boot tread sole made out of kangaroo leather. I kind of felt like a superhero having this kind of tread built into the bottom of my feet and toes.

After hiking the various Los Angeles Canyons, I took both my KSO and KSO Trek to water locations and on cement. When in water they act like mini fins, and drain nicely. The KSO Trek take a bit longer to dry out because of their suede covering, whereas the KSO have a mesh cover.

As far as cement, I’d stay away. With minimal shock absorbance, you feel the impact of every step on the hard ground. Asphalt is a bit more tolerable, but I would keep these for use in nature, or at least only for not running on cement.