Rosencrantz and Guildenstern Are Undead: Shakespeare, Vampires and Eurotrash 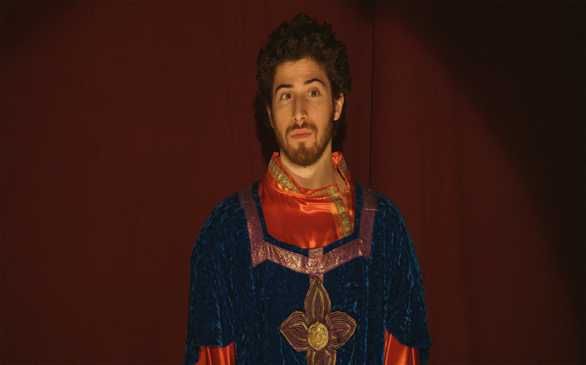 If you love “Wes Anderson with a sprinkling of the Coen brothers and, of course, a dash of [Tom] Stoppard.” If you’re dying to see “Shakespeare and Bram Stoker [make] love and [have] a baby, and that baby [be] delivered by Buster Keaton on a vaudeville stage.” If you want to poke fun at vampire movies, artsy, independent films, Shakespeare, love-lost melodramas and “Law & Order,” then you’ll have to step in line because Joey Kern has beaten you to it.

“I think our film is quite original,” continues the professionally trained actor who studied Shakespeare at the Royal Academy of Dramatic Art in London. “In a time when vampires have sunk their teeth into the film and TV landscape, it is refreshing to see a different take.”

The name of the film in question, Rosencrantz and Guildenstern Are Undead, so adroitly sells this dark comedy by itself. Alluding, of course, to Sir Tom Stoppard’s existential play “Rosencrantz and Guildenstern Are Dead,” this is not any kind of remake, unless you consider writing in vampires and taking out the entire premise of the play to be a remake. Writer-director Jordan Galland has even admitted that he presented the idea to the playwright god himself before filming.

Julian (Jake Hoffman, who has the voice of dad, Dustin) is our jobless, playboy protagonist who lives in his father’s doctor’s office. He answers an ad in the newspaper for a job directing an Off Broadway production of “Hamlet” only to learn that gone is the classical interpretation of Shakespeare. Instead, vampires plague the stage in this weird adaptation written by Theo (John Ventimiglia), who is a pale-faced Romanian vampire. As legend has it (and turns out to be reality), Theo has spent the last several centuries assembling cast after cast of humans for his play. Before opening night, he turns them into vampires in the hopes of luring the real Hamlet (Kern) out of hiding to end the quest for the Holy Grail.

Already making its way through notable fests like the Slamdance and Hollywood Film Festivals, Rosencrantz is a low-budget film that, according to Ventimiglia (whom you may remember as Artie Bucco from “The Sopranos”), does not mean it can’t stand its own against other, more pricey vampire flicks.

“It was made for the amount of money that they spent on catering for [Twilight],” jokes Ventimiglia. “It’s a comedy. It’s tongue-in-cheek. The others are slick pieces of work, and this is more of a not-taking-itself-too-seriously kind of film.”

However, it’s not always easy or as fun as it seems to make a comedy. Kern praises filmmaker Galland for his ability to “expertly directed an ensemble cast to understand and perform a very similar comedic tone, which can be very difficult to do. It’s one thing when you have actors shooting for a long period of time where you have more time to work on the material. When you have a lot of actors coming in for a day here or two days there it then relies heavily on the director to balance everything.”

What really hits the audience in the neck with razor-sharp talent is the cast who truly make the characters living, breathing people or, in some cases, completely dead and demonic. Both actors admit that they did their best to be original in a genre that has been sucked dry in recent years.

Ventimiglia views his supernatural character as “more of a Eurotrash kind of guy. [The director] originally had me in mind for a different role. When I read it, I said the only role I would do was the role of Theo. They later told me that they turned to each other and said, ‘Look at his eyes. This guy could be a vampire.’ It was a cool leap of faith.”

“Everyone has a classic image of my character, so I thought it could be fun to put a twist on that and, hopefully, surprise the audience with his abrasive weirdness,” says Kern, who is hesitant to reveal his character. “Sort of give them what they aren’t expecting.”

But the game is comprised by well-played sarcasm.

Try telling that to Sir Olivier.

Rosencrantz and Guildenstern Are Undead releases in select theaters July 16.