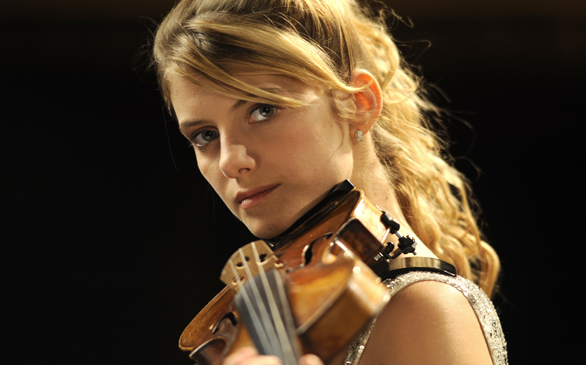 Melanie Laurent in The Concert
(Credit: Courtesy of the Weinstein Company, 2010)

Radu Mihaileanu takes a decidedly more comedic route than his previous films in The Concert, a hilarious take on a dark subject: people’s lives who were destroyed at the hands of brutal dictatorships.

During the Brezhnev era, Andrei Filipov (Alexei Guskov) was the conductor of the esteemed Bolshoi orchestra. When he refused to expel the Jewish musicians in their midst, one of them his own best friend, he was stripped of his position, publicly humiliated and blacklisted in the world of classical music.

Now many years later, when the disgraced alcoholic Filipov finds himself employed by the Bolshoi once again, this time as a janitor, he happens across a fax inviting the orchestra to play the Théâtre du Châtelet in Paris. It’s here that Filipov devises his impossible crackpot scheme: He’ll call together the musicians who were once expelled from his orchestra, silenced for years, and pass them off as the Bolshoi to an unwitting Parisian promoter.

Renowned French violin soloist Ann-Marie Jacquet (Mélanie Laurent) is brought in to sweeten the deal at Filipov’s request. Their pasts are somehow entwined and measure by measure Mihaileanu gives us clues to this stunning woman’s true identity.

Not only has Filipov called a gang of out-of-season musicians together to impersonate the Bolshoi, with one of Paris’ No. 1 soloists nonetheless, he boldly (and perhaps foolishly) chooses for them to play Tchaikovsky’s violin concerto. With just two weeks to whip his colleagues into shape, his plot seems too wildly absurd to ever succeed.

Mihaileanu tugs at our emotions with effortless skill as this ragtag bunch of has-beens makes their journey to the City of Lights. Subplots are delicately interwoven with a fair balance between comedy and honesty at play. Mihaileanu mixes equal parts National Lampoon, Jean-Pierre Jeunet too-bizarre-to-be-conceivable wackiness, with a touch of the sensitivity of Roman Polanski’s The Pianist. Surprisingly, when this league of underdogs comes out on top, you want them to succeed, whether that success is believable or not. It’s just so satisfying to see an inconceivable wrong righted by an inconceivable ploy.

In the mix, Mihaileanu doesn’t forget to allow the beauty of the music to surface, and we remember the elegance, intensity and wonder that draws people to the music of Tchaikovsky to this day.

The Concert is one of those films that flies by too quickly, enjoyable in every moment, a comedy that also manages to set the spirit soaring. This is truly remarkable cinema.