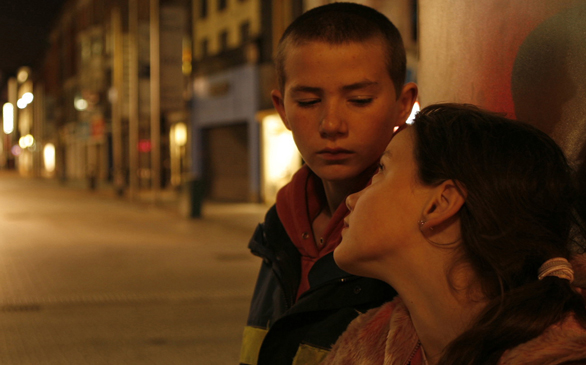 It’s hard not to get warm and fuzzy all over during this cute little tale, which follows the adventures of two young runaways who spend a day in the city of Dublin. Written and directed by Lance Daly, it stars two very talented newcomers – Shane Curry and Kelly O’Neill – who play best friends and neighbors.

Kylie (O’Neill) lives with five siblings and an overworked mother in a cramped working-class neighborhood, while Dylan (Curry) is growing up with an abusive father and the memory of his runaway brother Barry. One day after a violent altercation with his father during Christmas, Dylan, accompanied by Kylie who comes to his rescue, flee their respective homes and make their way to downtown Dublin in search of Barry and a new life.

Once in the city, they go on a shopping spree, purchasing a pair of roller shoes to glide around. But as the night wears on, the city takes on a seedier side and the duo learns to rely on their wits and strength to survive the mean streets of Dublin. From unsavory alleyways to suburban neighborhoods, the pair encounters drug addicts, prostitutes and child predators in their attempt to survive on their own.

With wonderfully charismatic performances by the child actors, beautiful black-and-white cinematography used to highlight the bleakness of their family lives and a short running time, Kisses manages a perfect combination of some great elements. Both actors are very likeable characters and hold the film up with their irresistible chemistry. Kylie is impish yet levelheaded; Dylan is savvy without being smarmy, and their friendship is believable.

Kisses is one of those little enjoyable gems that although it touches on the volatile topic of abuse, ends up spotlighting the sweet, tender, innocent relationship of the two kids.