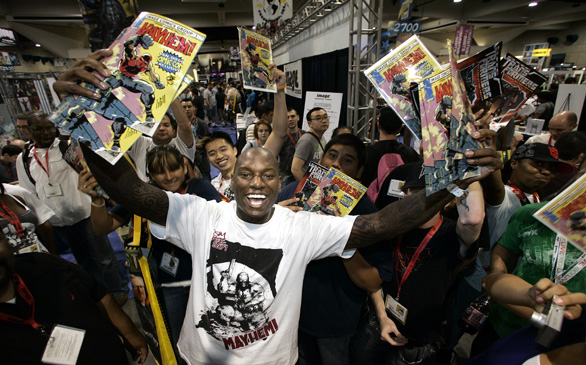 In late July, there comes a beast. A beast that consumes a whole city. A beast whose magnitude is far reaching and gravity measured in the hundred thousands. This beast goes by one name: Comic-Con, and its arrival is both imminent and undeniable.

Well … I guess you don’t have to go, so in that way it is deniable. And it doesn’t really consume a WHOLE city, just the San Diego Convention Center and the immediate surrounding downtown area. I guess it also goes by other names like Comic-Con International San Diego or the San Diego Comic-Con or just Con. Whatever. It’s happening, I’m going and it IS a beast.

What started out in the ’70s as a few hundred people getting together to talk and trade comic books has grown to over 125,000 people descending on the convention center to get the latest info directly from movie studios, toy companies and maybe even comic book publishers (That is, of course, if attendees read and/or care about comics, which many don’t.).

It is the largest pop culture convention in the Western Hemisphere and second largest in the world. There is one in France that is bigger, hosting 200,000 visitors.

Comic-Con really does take over the surrounding area. In fact, last year Syfy channel commandeered a whole restaurant – redecorating the interior and exterior and changing the menu to reflect their programming. There was also a scavenger hunt throughout the streets that ended up in Flynn’s Arcade, where the new Tron: Legacy lightcycle debuted.

It was my first Comic-Con in over 15 years and was really fun. So I’m going back – back to slay this media beast and claim a third crown of nerddom.

Special Features
6 ways to cut back at work and be instantly happier
4,340 views

Special Features
Ticket costs for theme parks climb more than for other forms of entertainment
2,418 views

Special Features
Ringling Bros. and Barnum & Bailey to Debut Out Of This World Circus Experience
6,203 views