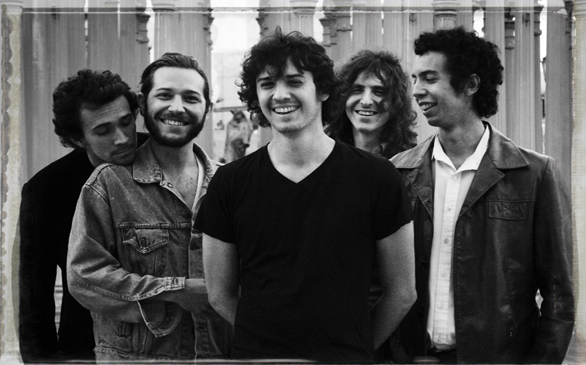 Southern California music festival addicts have their schedules booked all year round: Coachella in April, Electric Daisy Carnival in June and Warped Tour whenever it passes through. This month, festivalgoers should clear their calendars for International Pop Overthrow, a 16-day takeover of every indie club in Los Angeles by dozens of the world’s most up-and-coming pop groups around.

“That was the aim, to bring a world-wide pop team under one umbrella” says David Bash, the founder and organizer of the festival.

Returning to the site of its birth in 1998, IPO first expanded out of Los Angeles in 2001, when it took some bands out to New York and Chicago. Since then, it has been building momentum and touring around the country, as well as to the legendary Cavern Club in Liverpool, made famous by a little band called the Beatles.

The rock of the Beatles is really what the festival is trying to bring to listeners. There are eight different bands at a different club each night, playing what would be more accurately described as power-pop: melody heavy music with catchy lyrics that get the blood flowing. This is not KIIS FM’s Jingle Ball.

“What we mean by pop is essentially melodic rock ’n’ roll. It’s somewhat evocative of the way radio was in the ’60s and ’70s, of the formula that was being used that way – strong verses and strong choruses that really stay in your head even after the song is over,” Bash says.

Though the festival has expanded into folk and indie rock, power-pop is at its core. With the help of the Internet, Bash looks for bands who encompass this old-school approach to music.

“Our main source for finding bands had been MySpace for the last five years,” Bash says.

His process is fairly simple. He listens to the music, decides whether they would be a good fit and if all the stars align the right way, he invites them to play.

One such group is Band LeGrand, who sounds like the love child of Sufjan Stevens (at least, his more upbeat stuff) and a lo-tech Hellogoodbye. Ryan Keith, the band’s lead singer, founded the band in 2007 for an “American Idol”-style band competition under the name Ballroom Dancing and, through various lineups, brought it into the present day under its current name.

In a festival full of bands that look back to the Beatles and classic rock, Band LeGrand seems to look back even further, to Chuck Berry and rock before anyone even knew what rock might be. Keith shares that their writing process pays special attention to a song’s melody.

For Band LeGrand, IPO is a chance to present their brand of rock/power-pop to an open-minded audience.

“It’s really cool that David’s putting on a thing that’s geared toward pop that’s not Top 40,” says Keith. “Anywhere bands are getting together and shooting for one goal is cool.”

Band LeGrand performs July 28 at Molly Malone’s, along with the Singles, the Campbell Apartment, the Paper Hearts, Dime Box Band, the Motion, Adam Marsland and Supremium.

King Washington is a musically trained and talented band with a name that toys with the “what-if” possibility of George Washington agreeing to be king of America. Their style is a combination of old school rock ’n’ roll, folk rock and, of course, pop. However, these guys approach pop with a focus on musicality.

“We sound very musical. There’s a lot of harmony,” says Tyson Kelly, founding member, lead singer, pianist and guitarist for the band, adding that all of the members enjoy singing.

The band sites everyone from the Beatles and the Beach Boys to Radiohead and Pink Floyd as their influences, along with a more general ’60s influence. It’s hard to put a label on their sound, but it’s evident that the structure of their music is heavily influenced by the past.

“[Our songs have] a full verse that doesn’t repeat,” says George Krikes, the band’s lead guitarist. “It’s more of a song than an idea repeated over and over.”

Also unlike a lot of today’s music, the band sticks to the simple two guitars, one bass and drums format, as opposed to more manufactured, electronic sounds. The band’s set (which happens to be on Krikes’ birthday) begins at 9:30 p.m. Also playing are Susan Hedges, Heavy Young Heathens, the Paula Kelley Orchestra, Evil Maria, the New Fidelity and Eugene & the 1914.

Led by Zack Zmed, L.A. band the Janks have influences that span the entire spectrum of music. When they list classical music as a genre that helps them produce their sound (along with Led Zeppelin, David Bowie and Charles “The Bird” Parker), it almost feels like there’s an inside joke going on. It doesn’t help when they describe their sound as “Queen on an acid trip” and almost sound serious. The truth is, their sound really is a collection of different styles, culminating in something fresh, yet retro.

Earlier that night, John Wicks and the Records take the stage. No stranger to classic rock, Wicks has been performing in the band since the late ’70s. The Records reached the peak of their fame with their song “Starry Eyes,” a tune the band is still well known for to this day.

“Everyone was going crazy about it. It’s a blessing and a curse. I knew it was a classic back then. I’m proud and pleased,” says Wicks, the group’s lead singer and founder. No stranger to the festival, Wicks embodies the spirit of old meets new in pop music.

“While I’m not fond of categorizing music, power-pop is a little tarnished [by its association to pop]. Everything has got to be light,” says Wicks. “IPO is a great opportunity for bands who do this sort of thing to showcase their music.”

For a the complete festival lineup and more information, visit internationalpopoverthrow.com.