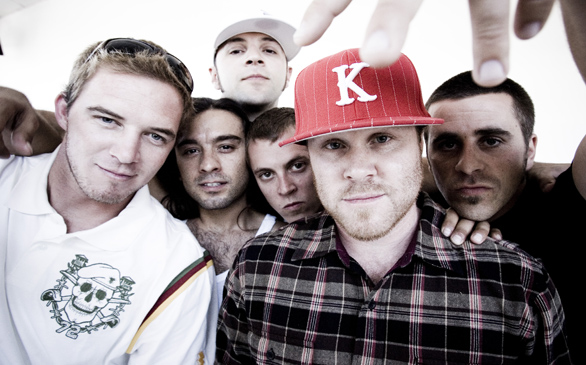 Ryan “Rymo” Moran (drums) laughs about the anecdote that tells of how Slightly Stoopid, a dub/rock/psychedelic jam group, came to be named.

Moran continues, “In a way, it’s kind of a blessing because when they hear the name, people aren’t going to forget that. The name just kind of got thrown out there, and it was funny. We’ll be sitting on the plane, and people will be like, ‘Oh, what band are you in? Maybe I’ve heard of you.’”

After the “Slightly Stoopid? That’s slightly stupid!” joke passes, people are more likely to recognize them when they play in their hometown of Ocean Beach, Calif.

Moran tells of the band’s beginning: “Miles Doughty (guitar, bass, vocals) and Kyle McDonald (guitar, bass, vocals) were the masterminds. They’ve been friends since they were kids. Growing up, living the San Diego lifestyle, playing music, they met Brad Nowell from Sublime, and he got the ball rolling for the band.”

The late, great Nowell signed Stoopid to his Skunk Records label while the band members were still in high school.

Moran comments on Sublime with Rome: “It’s good that those guys are back out again. We wish them the best. Those guys were such a huge help from the beginning. It’s great for them to get back on the road. It’s what people love to hear; it should be good.”

Moran grew up listening to “Top 40 stuff” when his sisters heckled him into listening to bands like NOFX and Led Zeppelin. When he was young, his mother forced him into the awkward instrument lessons that seemingly everyone must endure.

“My mom was like, ‘You gotta play piano,” and I didn’t really dig the piano much, and then trumpet and violin. I felt I had a calling with the drums. Listening to drummers, checking out what they’re playing and trying to play it myself, all those things came into play,” he shares.

Now Moran is inspired by all types of music – including world, hip-hop, reggae and jazz.

Stoopid will be playing near their hometown with co-headliners Cypress Hill to start the second leg of their Legalize It Tour in Irvine at the Verizon Wireless Amphitheatre on Friday, July 16. Stoopid will be pulling music from all eight of their albums, from the very first one in ’96 (Slightly $toopid) to the most recent tracks that came out in the summer of 2008 on Slightly Not Stoned Enough to Eat Breakfast Yet Stoopid.

“So [we’ll] kind of do a little bit of old, a little bit of really old, some newer stuff, some stuff that’s so new that we haven’t recorded it yet. [We’ll also be] taking fan favorites and our favorites as well,” says Moran. “We usually throw in a few improv pieces that are new that we haven’t had a chance to record yet. We write a lot, so we probably do like one or two little jams or something that we kind of just wing.”

Last summer at Verizon left big shoes to fill, but Moran says, “We’re up there working; some nights are phenomenal, miracles, and some nights are not so great. Just expect a really fun, high-energy show. We just want people to have fun. We’re not trying to create some sort of political statement. We want people to check their concerns at the door and just party and have fun.”