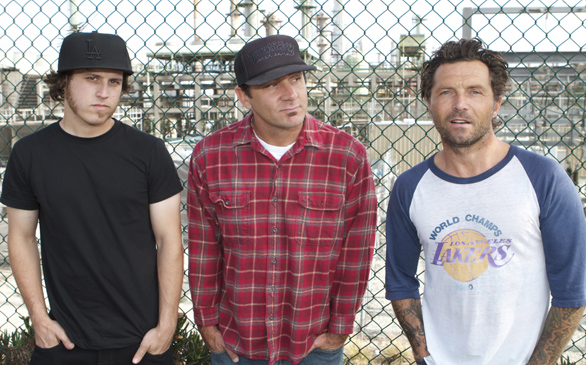 The Black Pacific roll out their self-titled debut album Sept. 14.

After 20 years of touring and releasing records with Pennywise, Jim Lindberg has started a new band straight out of Hermosa Beach. The new band is called the Black Pacific, and Lindberg says the group features a fresh lineup and that their upcoming album is “filled with 10 powerful and heartfelt songs.”

The self-titled album is due to drop via SideOneDummy Sept. 14. The Black Pacific make their live debut around the same time with a show at the Epicenter Twenty Ten Festival in Fontana Sept. 26.

Lindberg left Pennywise in 2009 and has been working to launch the Black Pacific ever since. Fans can preview two of the new songs at theblackpacific.com.

The world’s leading purveyor of reggae music has a new compilation out to help you keep feelin’ irie all summer long. VP has just released Reggae Gold 2010, an 18-cut collection featuring hits like “Hold You” from Gyptian, “Holiday” by Ding Dong featuring Chevaughn Clayton and “As We Enter” from Damian ‘Jr. Gong’ Marley and Nas.

Lots of different styles of reggae are highlighted on Reggae Gold 2010 where the dance craze inducing “Skip to Ma Luu” by Serani heats things up, the smooth dancehall of Busy Signal’s “Sweet Love (Night Shift)” heads straight for the bedroom and “Hold the Line” from Major Lazer, Mr. Lex and Santigold basks in the afterglow. Shaggy, Vybz Kartel, Beres Hammond and Etana are among the other contributors, and a mix disc from Jamaican DJ ZJ Chrome is also included.

They’ve been recording and touring more or less nonstop for the past 20 years, and now the Black Crowes have announced they are going on hiatus indefinitely. A flurry of activity precedes the downtime though, beginning with the release of an all-acoustic double album called Croweology Aug. 3. The band picked out 20 of their hits and favorite catalog cuts for the album and then stripped them down with new acoustic arrangements. The track listing includes big hits like “Remedy” and “She Talks to Angels,” and the new versions of “Jealous Again” and “Morning Song” have just hit radio and the iTunes store.

The band plans a lengthy tour where the shows are three hours long and split into an “Acoustic Hors D’oeuvres” set and an “Electric Reception” set. The Say Goodnight to the Bad Guys Tour begins in August, comes to the Hollywood Palladium Dec. 11 and closes immediately after with a six-night run at the Fillmore in San Francisco.

If you’re planning on hitting the Cool Tour show with As I Lay Dying and Underoath at the Hollywood Palladium July 31, it would behoove you to check out the Cool Tour Download Pack. Visit the tour’s Facebook page to grab a bunch of free stuff, including the 24-track 2010 Cool Tour New Artist Sampler, a Summer 2010 sampler from Fearless, videos or Mp3s from War of Ages, the Acacia Strain, Cancer Bats and others and discount coupons for merch from Atticus, Alt Press, Ding! and Facedown.

Xzibit and Indaba Music, the top online destination for music creation, have teamed up with a remix contest for Xzibit’s new single, “The Hurt Locker.”

“I’m excited to see what fresh musicians, rappers and producers are there,” says Xzibit. “I want to see what Indaba Music’s community can bring to the sound.”

The grand prize winner gets a package worth around $5,000: a V.I.P. trip to Los Angeles to meet Xzibit and DJ Skee, a recording session and a Custom Blue Microphone and Monster gear pack. Prizes are also awarded to second and third-place winners. Find the details at Indaba.com; contest ends July 27. Xzibit has a new release called MMX scheduled to drop later this year.

Big Head Todd and the Monsters, that is. Rocksteady, the new “soul/Caribbean” release from the Denver-based band, drops July 20, and the band invades the House of Blues Sunset Strip July 30.