The Secret in Their Eyes: July 17 @ Warner Grand Theatre 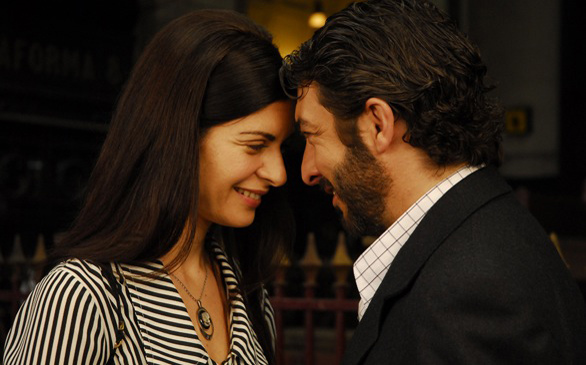 Irene Menéndez Hastings and Benjamín Espósito in The Secret in Their Eyes
(Credit: María Antolini, courtesy of Sony Pictures Classics)

Staring directly at the camera, a man wearing a white lab coat, splattered in what looks like either blood or red paint, pushes the protective lab glasses down his face so that his eyes are no longer exposed to whatever is in store. Casting his eyes downward, he reaches for the red toy car next to him. The camera follows his gaze as the mini truck he has in his grip hits a domino, which hits another that sets off the sequence of Mouse Trap-like (remember that game?) setups that lasts nearly four minutes.

Sound familiar? That band, OK Go, which first gained attention for the music video where they jumped around on treadmills, has done it again. Their single, “This Too Shall Pass,” has been made into not one, but two music videos, each consisting of one long, intensely choreographed shot with incredible movements by the camera to capture the lip-synching as well as the cute stunts that must have taken the interns years to set up.

I recently saw both music videos made for the single and was reminded just how incredible the director of photography and his crew of cinematographers can be; how they can magically birth a scene that lasts in your cranium for years. For me, one such scene that has stuck with me throughout the years is from Martin Scorsese’s 1980 classic Raging Bull starring Robert De Niro and Joe Pesci. To be honest, the film is memorable, but one scene greatly outshines the rest. Sure, I appreciate the black-and-white, slow-motion sequences of De Niro’s Jake LaMotta in the boxing pen, hazy smoke forming a wall between him and the camera as lights flash behind him.

To get to my always-evasive point, there is a sequence about halfway through that film that is of exceptional genius. It starts in the holding room. Pesci is prepping his on-screen brother De Niro for the biggest fight of his career with hopes of winning a prize belt. The camera follows the two as they walk down the long corridor, around the corners, through the crowd in the auditorium and into the ring. The camera doesn’t stop rolling the entire way, forcing the cameraman to hop on a crane in order to get the aerial view of the pen.

Just like they did for OK Go’s four-minute continuous shot, Scorsese never lets you look away. You can’t help but goggle in amazement of the timing, the perfect capture of what the frame holds – exactly what the director wants you to see, nothing more and nothing less.

I was so reminded of the power of the long shot last week when I saw El secreto de sus ojos (The Secret in Their Eyes), a film from Argentina that won the Academy Award for Best Foreign Language Film this past year. It is part of the Foreign Film Series at the Warner Grand Theatre and will be screened on Saturday, July 17.

Benjamín Espósito (Ricardo Darín) is a retired Argentine criminal investigator who is attempting to write a biographical novel about one of his unsolved cases from decades prior. A woman is viciously raped and murdered, leaving a grieving husband whom she just married and who will stop at nothing to find the killer. Espósito’s professional and personal relationship with colleague Irene Menéndez Hastings (Soledad Villamil) is a focus of director Juan José Campanella’s film, which is both a murder mystery thriller and character study sprinkled with humor and love.

The “secret” in their eyes was quite clandestine, and the film started off relatively rocky in my book. And then came the scene. You know, “the” scene that drastically changed how I felt about it. Not to give anything away, but there is an epic chase through a soccer stadium, and the entire chase is captured in one, long shot. It’s beautiful, and I don’t know how to describe the magnificent splendor it brings to the film. To end on a cheesy note, the acting is the heart of the movie, but this six-minute long shot is its soul. The only way to understand is to watch for yourself.