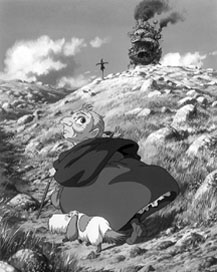 One of the most common misconceptions about animated movies produced by such famous American ’toonsmiths as Pixar and Disney is that the work of the visual artists who draw the characters is the engine that drives production on the films. In fact, it’s the verbal artists – the human actors – who provide the bony scaffolding upon which the characters are later fleshed out by animators.

Making Monsters, Inc., the big furry hit for Pixar in 2001, director Pete Docter spent days in a recording studio listening to Billy Crystal improvise much of the wisecracking patter for his animated character, Mike Wazowski.

But when Docter was put in charge of the American adaptation of Howl’s Moving Castle – the latest waking dream from Japanese animation legend Hayao Miyazaki – he had to keep Crystal’s character on a much shorter leash. This time, the words had to precisely fit Miyazaki’s animation, which meant that Crystal’s vocal performance in the pivotal role of Calcifer – a small tongue of fire with a big mouth – had to be controlled down to the last syllable.

And there was no room for embellishments. "Billy would play around, throw in modern references and little jokes," Docter says. "But we made a decision to not put those in. Miyazaki creates a world that you get to live in for a while, and by the end of the film you feel like you’ve actually gone somewhere else. That world is so immersive that you can never wink and step outside the story with a reference to Starbucks or something."

There are no Starbucks in what appears to be Europe in the early 20th century, the setting of Howl’s Moving Castle, a structure that clanks around the countryside on mechanical legs. In fact, if the original dialogue had not been recorded for audiences in Japan, where the picture has already earned more than $210 million, Howl’s Moving Castle could easily pass for an American film. That made dubbing the vocal performances into English crucial to the film’s commercial prospects, because U.S. audiences remain stubbornly resistant to subtitles.

It’s the same process that Miyazaki’s Spirited Away went through – under the lavish and loving care of the filmmaker’s American sponsor, Pixar – before it won the Oscar for best animated feature in 2003. Spirited Away remains the top-grossing picture in Japanese history, after Titanic, but despite its glittering pedigree, it still earned only $10 million in the United States.

No matter how magnificent its visual elements, Howl’s Moving Castle would not attract much of a U.S. audience if it were dubbed to look like one of the old kung-fu imports from Asia.

"If you’ve seen live-action films that are dubbed," Docter says, the lack of synchronization is "so obvious that you end up looking at the mouth most of the time. The words aren’t fitting with the way the lips are flapping."

An all-star cast – led by Crystal, Christian Bale (as Howl), Jean Simmons (as Grandma Sophie) and Lauren Bacall (as the Witch of the Waste) – was assembled to make the words fit the flapping lips. "We can’t change a frame of the film, so it was quite a challenge in terms of fitting syllables. The moment you tell the actor to speed up a little so you can fit that M shape on the character’s lips, you really lose the emotion of it. We had to cut and contract words on the stage so the actors wouldn’t have to talk really fast."

Because Miyazaki writes all his scripts and draws the storyboards himself – by contrast, Docter was one of nine writers, and too many animators to count, on Monsters, Inc. – he animates his films first, then the actors synchronize their performances to his work. Docter says Miyazaki explained he inverts the process so he can rigidly control what actors like Crystal might try to do to his dialogue.

Even within the confinements of performances that had to be parceled out by the syllable, there was room for creativity, Docter says. In the Japanese version, for instance, one actress did the voices for the film’s main character as both a young and old woman. The part was split between Emily Mortimer (young Sophie) and Simmons for the English-language adaptation.

"We usually work standing up in front of a microphone to get good projection," Docter says. "Jean asked to have the microphone put down lower so she would have to hunch over and would sound more like the character she was looking at on the screen."

It also brought her within reach of her toes, so she could count off the number of syllables she had left before Grandma Sophie began to look like she was in a bad kung-fu movie.