'My Boys': Palling Around with Reid Scott and Jordana Spiro 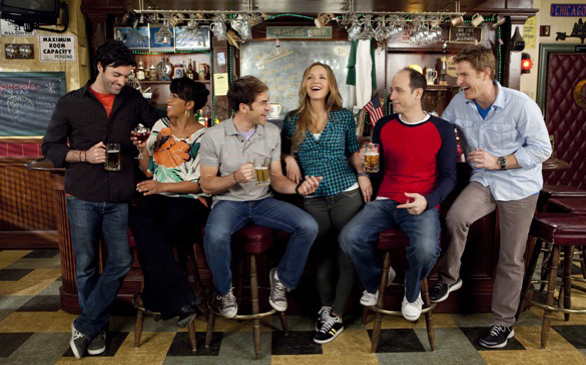 With the gang back together, the highly anticipated fourth season of My Boys starts up. The sitcom makes its way back to TBS after a yearlong hiatus.

Reid Scott, who plays Brendan Dorff on the show, is thrilled to be working with the “My Boys” cast and crew after such a long break. Scott explains that because the sitcom isn’t filmed before a live audience, it’s shot more like a movie, where they’re locked in a studio for four months at a time.

“We have a blast. We’re a well-oiled machine. We have a lot of fun between joking around,” tells Scott.

Jordana Spiro, who plays the star Penelope Jane ‘P.J.’ Franklin, has bonded with her co-stars both on and off set, including Scott.

“We’re neighbors, so we [got] together and [watched] the World Cup games together. He’s awesome, and the guys give him so much crap for being the handsomest,” jokes Spiro.

Spiro considers her friend Scott much more than just a pretty face though. “He’s just one of those awesome guys that kind of [know] about everything. He’s the most cultured person,” she says.

Spiro does currently have a boyfriend, but she claims he’s not jealous of all her male co-stars.

“I think he’s more jealous of the soccer players in the World Cup.”

Spiro is definitely going to miss watching the games and will especially miss seeing her favorites, Carlos Vela and Gonzalo Higuain.

Looking back on the previous seasons of “My Boys,” Spiro can recall numerous unforgettable times, but among her favorites is when they shot at Wrigley Field in Chicago.

“It was one of the most memorable moments for sure. Whether you’re a baseball fan or not, you’ve got to realize it’s sort of a once-in-a-lifetime experience.”

Scott has been fortunate to be a part of other projects aside from “My Boys.” He is set to play a recurring role as Dr. Todd on the Showtime series, “The Big C,” with one of his favorite actresses, Laura Linney. He is also starring in the upcoming film, Losing Control, which is headed for the festival circuit and will hopefully be released next year.

“I have a preference for good material,” explains Scott. “I really believe if it’s well written, regardless if it’s film, TV or stage, it’s got to reign true and be a lot of fun to work on.”

Scott has made an enviable natural progression from small roles at the beginning of his career to more significant parts, and now to leading roles.

“I’m sure luck played a little part in that,” admits Scott. “I also think it’s just about making the right choices. The only power an actor ever has really is the power to say no to something.”

Scott has great confidence in his choices so far.

“You really have to be careful as an actor to not waste your energy on something you don’t think is going to be great. Anything I’ve ever done I’ve really had a lot of fun doing.”

When she’s not filming or auditioning, Spiro spends much of her time at Columbia University getting an MFA in Directing. Spiro hopes to continue acting as she pursues directing as well.

“If I could strike that balance that would certainly be ideal. We’ll see what happens,” she says.

After all of their success, both Scott and Spiro still find time to give to those less fortunate.

Scott is actively involved with the Humane Society as well as other charities. When in Los Angeles, Spiro shares her time with Peace4kids, a recreational program for foster children.

“I always felt the need to give back in some way. It’s not just charitable work you’re doing. You also feel really good yourself,” shares Scott.