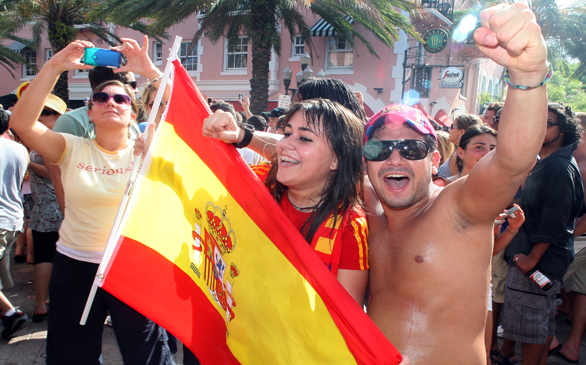 Crowning themselves World Cup soccer champions took a long time. In fact, they had to wait forever.

Spain prevailed over the Netherlands by a score of 1-0 in this year’s World Cup final in South Africa. Midfielder Andres Iniesta nailed the game-winning goal in the second half of overtime, squeezing an eight-yard blast past the Dutch goalkeeper just before the 15-minute period ended and penalty kicks would take place.

Iniesta celebrated vividly and emotionally, taking off his jersey; although he earned an automatic yellow card. Forward Cesc Fabregas delivered the pivotal pass to Iniesta inside box for the eventual key assist. Iniesta was given the man of the match award.

“I can’t quite believe it yet,” Iniesta stated to YahooSports.com. “I had the opportunity to score that goal, which was so important to my team. It’s something absolutely incredible. I simply made a small contribution to my team in a match that was very rough.”

Nicknamed “La Furia Roja (Red Fury),” Spain was at odds after suffering a loss in their opening match against Switzerland. However, the most talented and heavily favored Spain kept composure and won all of its remaining affairs. They totaled a record of 6-1 for the tourney.

“This really is quite a cup,” Spain goalkeeper Iker Casillas said to YahooSports.com. “The European Championship was the most important moment of our lives, but today is much bigger than anything else.”

Casillas was an integral part of the team’s success at the cup, but he truly showed his skills in making several thrilling saves in the championship contest.

The World Cup will be in the hands of the Spaniards for the next four years until the tournament starts up yet again, but this time Brazil will host. Both Spain and Brazil are favorites already, but Argentina and Germany might have something to say about that.