'Drunk Talk': Every Sunday-Aug. 1 @ The Dragonfly 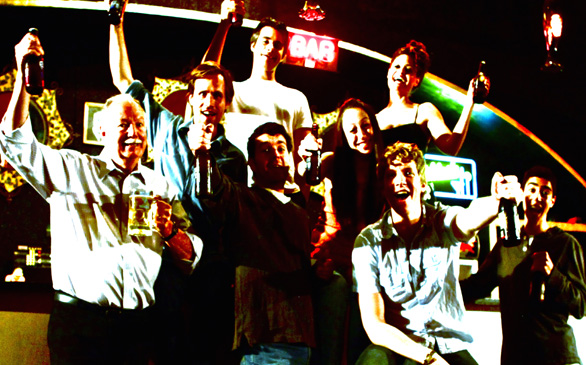 On Santa Monica Boulevard just after Vine, there is a little nondescript place called the Dragonfly. A brightly colored building with a simple sign to mark upcoming shows, the venue is actually a bar used for theater productions, which is why “Drunk Talk,” the newest play to hit the small Hollywood place, severely played with my head.

Seated in five rows, the audience is arranged facing the bar where, prior to the show, people are mingling and drinking. Many are noticeably drunk, and chatter is hard to quiet even when the lights begin to blink. The mind trick is that actors and audience members are seated together unknowingly. When it starts, you aren’t allowed back at the bar for obvious reasons, but a cocktail waitress floats affably through the aisles to keep the alcohol flowing.

McSwiggins is the official name of the bar that is closing down due to financial woes. The bartender has been there for years and was hoping to run the place some day. Loyal customers and college graduates who return for the memories the university bar holds begin drinking, for old time’s sake. A couple on the rocks as well as the mayor of the city swiftly bring in the occasional laugh, but the good times don’t really start rolling until the second half of the performance, particularly with the partially improvised monologue delivered by the inauspicious busboy.

Like any steadfast mixed drink, “Drunk Talk” tastes better with every sip of character development and chug of unraveling plot line. The jokes build slowly, but what really catches the audience by the bottle are the occasional interactions by cast members with the people seated “in the oddly arranged bar furniture.” Not to ruin any surprises, I will say that it is essential to be prepared to join in with the crowd that is so boisterous, several members were escorted to the restroom mid-show.

The actors hit their marks with practiced agility, and their dialogue is delivered with accountable believability. Sure, it all becomes mumbled speech by the end, but that’s just drunk talk.