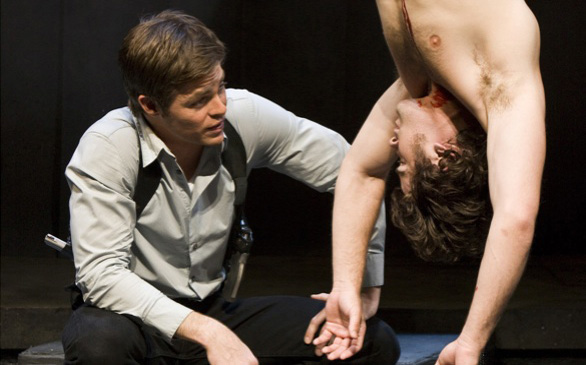 Chris Pine and Brett Ryback in “The Lieutenant of Inishmore”
(Credit: Craig Schwartz)

Don’t be surprised if a few of your fellow theatergoers march out of “The Lieutenant of Inishmore” in a huff halfway through the final act. This isn’t a play for the faint of heart, and director Wilson Milam goes, quite literally, for the jugular, creating a spectacle that’s haunting, hilarious and deeply disturbing. For those who chose to turn tail and abandon the show as it reaches its climax, count it as their loss because the play is one of the best shows to grace the Mark Taper Forum’s stage in recent memory.

Awkward, brutal, bloody and unrelenting (Did I mention it’s a comedy?), playwright Martin McDonagh is known for works that thrive from their ability to take violence, humiliation and torture and turn them into oddly compelling, beautifully cultivated creations, such as his Oscar-nominated screenplay for In Bruges or his Tony-nominated works like “The Pillowman” and “The Beauty Queen of Leenane.”

A shoe polish black comedy that seems like something Quentin Tarantino might have authored had he gone into theater, “Inishmore” is McDonagh’s thinly veiled farce about Northern Ireland’s longstanding war for independence from England. It begins inside a shabby old shack on the outskirts of a quiet Irish town with Donny (Seán G. Griffin) and Davey (Coby Getzug in an assured and magnetic performance) examining what remains of a dead black cat.

But this isn’t any cat. It’s Wee Thomas, the beloved pet of Mad Padraic (Chris Pine), a man so mad, “the IRA wouldn’t let him in,” who’s off on a rampage of torture and chip-shop bombing in Northern Ireland. Called in the middle of deciding which nipple to slick off a drug dealer, Padraic races home to be with the cat he loves more than life itself and bloody, hilarious carnage ensues.

Pine, of Star Trek fame, was most recently onstage at the Geffen in last year’s production of “Farragut North.” Though at times he seems to be channeling his Enterprise predecessor William Shatner with an Irish lilt, he’s wonderfully capable onstage, confidently strutting across the boards as an impish man-child with a shotgun temper in this stellar production.