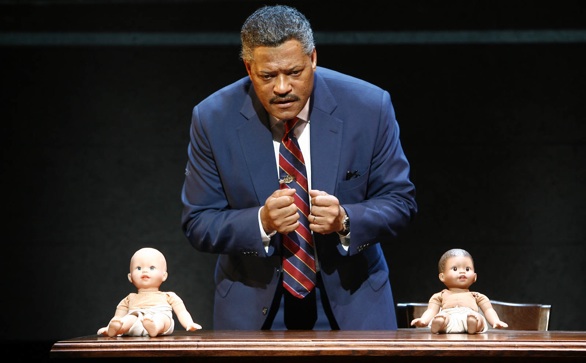 Written by George Stevens, Jr. and directed by Leonard Foglia, “Thurgood” follows the inspirational life of Supreme Court Justice Thoroughgood Marshall (He shortens his name to Thurgood in second grade because he hated the length of the original spelling.).

A heavy framed Laurence Fishburne enters the stage wearing a navy suit, tie, black-rimmed glasses and a cane. There is a long table center stage with four chairs around it, a podium in the middle of the table and a large white American flag in the background where images are reflected throughout the performance. He begins to talk about his life, where he came from – Baltimore, Md. – his family history, segregation in the South and the stories that changed him and led him to a long career in law, followed by the 32nd United States Solicitor General and then to a 24-year term as Associate Justice of the Supreme Court of the United States.

He says law is like a weapon. In his most famous case, Brown v. Board of Education, he argued that “separate but equal” could not apply to the public education system because “colored” children were not given as equal of an education as the white children and, therefore, “separate but equal” did not work. He talks about meeting his first wife, Vivian “Busters” Burey (“Busters” was the nickname given for her voluptuous figure.), and her death to cancer at the age of 44. He marries again to Cecilia Suyat and bears two sons.

There are many light humorous moments, as well as deeply heartfelt ones. Fishburne morphed into Thurgood magnificently. One-man shows are not an easy task to undertake as an actor, but Fishburne does it with grace and elegance. He is absolutely wonderful to watch, and the life of Thurgood Marshall is enlightening.

When he exits the stage the same way he came on, you are left with an overwhelming feeling of wanting to do something really great and noble in your life. I’m not sure if it’s from Thurgood’s life, Fishburne’s performance or a combination of witnessing two great men.