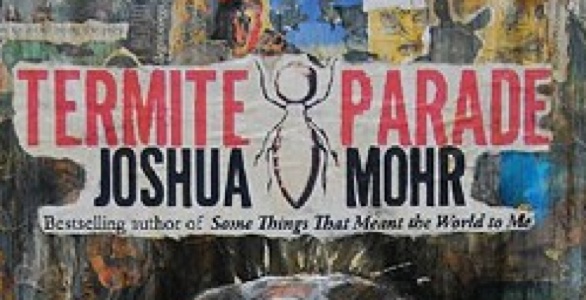 There’s something about books featured in anything related to Oprah that automatically turn me off. Maybe it’s because I don’t like it when a single person tells me what books I should read because they’ll change my life (They’re usually overrated.). Reading books by authors whose other works have been pushed by an Oprah outlet, on the other hand, I have no problem with.

Such is the case with Joshua Mohr, whose Some Things That Meant the World to Me was featured in O last year. Now, he’s come out with Termite Parade, an exhibition of human emotion, failure and nature. It’s really a novel about Derek, an auto mechanic who lashes out at his girlfriend, Mired – a woman herself lacking in self-esteem – while carrying her up the stairs one night. But when Derek’s twin brother, Frank, an aspiring filmmaker, gets wind of the situation, Derek must decide whether to tell the truth himself or let Derek spill the beans.

The book reads like a lighter, (slightly) more optimistic version of Chuck Palahniuk (author of Fight Club), and although the story is a veritable microscope of humanity at its worst (and maybe a glimpse of it near its best), it examines both our motives and the consequences of our actions in a very readable fashion.


Termite Parade is currently available.
Article posted on 7/13/2010
This article has been viewed 3518 times.

Fiction
‘The Phantom of Menace’ is a delightful parody of Star Wars, Shakespeare
1,586 views