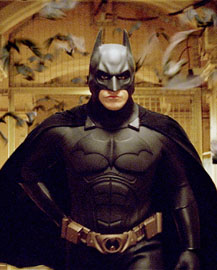 Before Memento director and critical darling Christopher Nolan (who also helmed the Al Pacino-headlined Insomnia) took the reigns of Warner Bros.’ big-budget summer blockbuster movie, it was thought that the current Batman franchise – which fizzled after the release of 1997’s Batman and Robin, starring "ER" alum George Clooney as the caped crusader – had perhaps fizzled out for good.

It’s nice, then, that the tone and feel of Joel Schumacher’s debacle of a film doesn’t come close to Nolan’s Begins, which is a darker, smarter take on the heavy-hearted story of Gotham’s tormented savior.

The film is set years before Tim Burton’s Batman, taking its time to show why a young Bruce Wayne is scared of bats (he falls into a bat-infested cave when he’s just a kid) and, more importantly, how and why he blames himself for the death of his do-gooder parents. Bruce – who’s played by the hearty, soulful Christian Bale (The Machinist, American Psycho) – lets his anger from the death of his mom and dad overtake his rage, and therefore sets out on a seven-year quest to search out the heart of human evil all around the world. After being taken in and trained by a group of highly trained renegades led by Henri Ducard (Liam Neeson), Bruce decides to return to his Gotham roots and help purge the city of its evil, crime-driven underbelly.

One of the best things about Batman Begins is its well-rounded, multifaceted cast, which is led by Bale (an indie actor who has previously failed in headlining a big-budget hit) and also features Morgan Freeman as Wayne Enterprises employee/friend Lucius Fox; doe-eyed Katie Holmes as an assistant to the DA who is also Bruce’s childhood sweetheart; Gary Oldman as Lieutenant (who will eventually become Commissioner) Gordon; and the irrevocably wonderful Michael Caine, who portrays Bruce’s butler, Alfred, with an incredible amount of warmth, wit and overall panache.

Begins is probably the best movie prequel ever, and succeeds in part because it delves deep into the story at hand instead of concentrating too heavily on making sure its outcome will lead into the already released, subsequent Batman films. Nolan’s knack for art-house fare mixes well with the Batman franchise, making Begins the start to a story which shouldn’t be missed.

Batman Begins is currently in theaters.