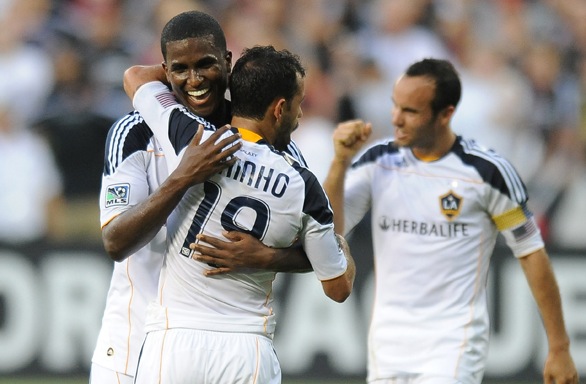 The Galaxy’s Edson Buddle celebrates with Juninho and Landon Donovan against D.C. United July 18.
(Credit: Chuck Myers/MCT)
The Los Angeles Galaxy got back in the winning column again after a 2-1 road victory at D.C. United on Sunday. With the victory, the Galaxy improved to an MLS-best 39 total points (12-2-3), and they are still in first place of the Western Conference standings. Meanwhile, D.C. United dropped to 3-11-3 for this season’s worst record thus far.

Landon Donovan’s penalty kick score in the 58th minute lifted the squad past the hosts, who had knotted the score four minutes prior when Andy Najar headed a goal after a Pablo Hernández cross. A penalty kick was awarded because Julius James mistakenly touched the ball with his hand inside the box. Donovan went on to place the shot left.

“Every team he’s on, he makes a difference,” Galaxy coach Bruce Arena told YahooSports.com of Donovan.

Forward Edson Buddle scored as well, having done so in the 38th minute of the first half. Buddle, who netted his MLS-best 11th goal, tallied the score off his own rebound from inside the box.

After a two-game road trip, Los Angeles now comes home to face the San Jose Earthquakes on Thursday, July 22, at the Home Depot Center for a 7:30 p.m. kick-off.