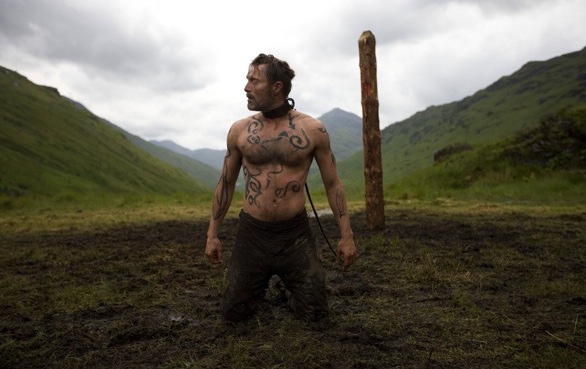 Valhalla Rising is about a mute warrior named One Eye (Mads Mikkelsen) and a small collection of Scottish Christians that set sail for Jerusalem in 1000 A.D. They expect to find the Holy Land, but end up somewhere else entirely. Murder and madness are all that the Crusaders discover when they climb ashore.

Nicolas Winding Refn, the Danish filmmaker responsible for Bronson, wrote and directed Valhalla Rising. Like his previous film, Refn eschews a traditional narrative and opts instead for a more experimental approach. Your enjoyment of the film may be predicated by your tolerance for avant-garde storytelling techniques. You’ll find no lengthy exposition during the film’s running time, nor will you be subjected to the typical beats of an epic period piece.

Valhalla Rising is not the Viking epic implied by the trailer. It is a film that moves at a measured pace, a reward for patient audiences. Those individuals looking for simple escapist entertainment should look elsewhere. Refn is interested in the drama that stems from ideas, as opposed to action, and his film’s chief antagonists are nature, a changing world and the false notion that any one person is in charge of their own destiny. Destiny, like death, comes to us despite our best-laid plans.

However, as meditative as the film may be, it does boast several scenes of extreme violence, which is something of a watermark amongst Refn’s oeuvre. Some stabbings, some choppings and a quick – but graphic – disemboweling are among the select atrocities man visits upon fellow man. Most of these acts are carried out by the character One Eye.

Mikkelsen is an intriguing talent, most recognizable to American audiences as the villain in 2006’s Casino Royale. He is a frequent collaborator with Refn, having worked on four of the director’s seven pictures. He has no dialogue here, not a single line in the entire film, but he commands your attention when he’s on the screen. Mikkelsen exudes a state of constant confidence, regardless of his character’s situation or limitation. It is a confidence that inspires the Christians to follow him, and an audience to watch him, even as he goes to his own violent end.

Valhalla Rising is a film that crackles with a beautiful intensity, an heir to Werner Herzog’s more elegiac works.


Valhalla Rising releases in select theaters July 23.
Article posted on 7/23/2010
This article has been viewed 2742 times.