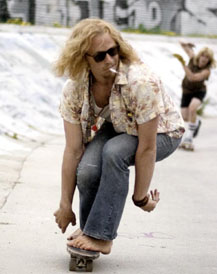 Lords of Dogtown is probably the best movie this year I can’t recommend.

It’s skillfully made, it contains a cheerfully wacko performance by Heath Ledger, and it explores a fascinating culture. But there’s little reason to see it. Mostly, that’s because Lords is a wan fictional version of a true story already told in the muscular, turbo-powered 2001 documentary Dogtown and Z-Boys.

If Z-Boys had not come out a couple of years too early to cash in on the current documentary boom, there’d be no reason for Lords. Both movies zero in on a gaggle of teenagers who – in Venice, Calif., in the mid-’70s – basically invented skateboarding as a sport. The documentary is riveting, even if you don’t care about skateboarding (count me among those who do not consider it especially gnarly).

The new film tries to flesh out skateboarders’ lives by covering some of the side activities they enjoyed – i.e., girls and squabbles – but that adds nothing. In fact, the only genuinely fresh element here is the almost unrecognizable Ledger, playing a doof who organizes the skateboarders into a team.

The new movie was written by Z-Boys director Stacy Peralta, who was one of the skateboarders and who, not surprisingly, comes off as the nicest of them. Lords features the same people and some of the same dialogue ("We’re going to be on summer vacation for the next 20 years!") but, whereas the documentary made you feel like you were there for a pivotal moment in popular culture, the new movie makes you feel like you’re somewhere close to a re-enactment of a moment that was kinda cool.

Give director Catherine Hardwicke (a pal of Peralta’s) credit for the unique look and energy of Lords – her nicest touch is using ragged, raw, hand-held cameras to show the boys’ lives and smooth camerawork to suggest how instantly at-home they feel when they’re boarding. But there’s not much she can do about the fact that – like Gus Van Sant’s Psycho or Haylie Duff – a better, more real version already exists.

Lords of Dogtown is currently in theaters.