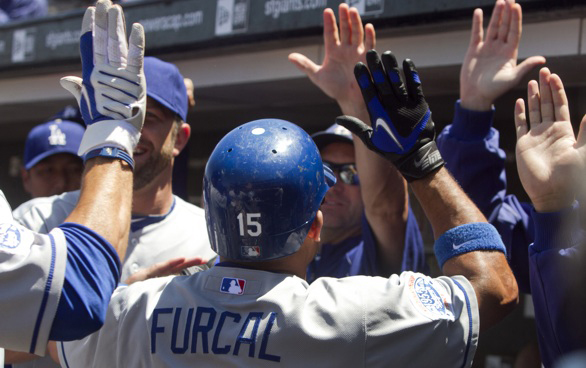 It could be said that a major league baseball season has seasons of its own, monthly shifts in the emotional climate of the game. From the virginal months of April and May, when anything seems possible, to the dog days of June and July, when teams start to define themselves, to that last third of the season when every game REALLY starts to matter. Yes, baseball fans, at long last, August is upon us (in a few days anyhow). August, when you can poke your nose into the sports section and legitimately raise your eyebrows at the site of the standings, when (should we be so lucky) the savory aroma of pennant fever fills the air. This year, Los Angeles baseball fans are again so lucky.

Both the Dodgers and Angels are in striking distance of division titles as the season heads down the stretch. And, curiously, both teams face their respective division leaders in two separate series to begin the final third of the season: Angels against the Texas Rangers and the Dodgers against the San Diego Padres.

I can hear you thinking, “The Padres are still in first!” Apparently so, that same Padre organization that finished in last place for the past two consecutive seasons has held on to first place since mid May. For an organization enduring a complicated ownership transition in recent years something has apparently clicked (Dodger top brass, take note.). The team has managed to fight its way to one of the best records in the National League. They’ve had success against almost every team except, strangely, the Dodgers, whom they’ve lost five of six so far this year. In any case, they are in a position to serve a knockout punch to the Blue Crew in the coming week. The Dodgers, on the other hand, are weaving and bobbing to land a few punches of their own.

The recent four-game series against the New York Mets would indicate that the Dodgers are stronger than some would have believed after they dropped the first six games coming out of the All-Star break. The much-maligned starting rotation has turned in quality starts from each of the pitchers. Even the pesky question of who fills the fifth spot has been tentatively answered by the consistent contributions of young Carlos Monasterios.

As for the bullpen, the recent shaky outings by closer Jonathan Broxton and the absence of set-up man Ronald Belisario has been assuaged by the continued dominance of Hung-Chih Kuo (a left-handed batter has yet to get a hit off him this year) and the contributions of freshman Kenley Jansen. The 22-year-old right-hander brought attention to himself by pitching in consecutive outings against the Mets. He retired the side in order and struck out two batters in each of the two innings he has pitched. The other 22-year-old hurler on the staff, Clayton Kershaw, has continued to stake a claim on the title of staff ace with his eight-inning shutout performance Sunday, July 25.

This re-emergence of the pitching staff appears to have come just in time to rescue a struggling batting lineup. Slugger Manny Ramirez has been nursing a strained calf muscle and will likely be unavailable until late August. All-Star Andre Ethier has been mired in the worst slump of his season. The team has had to look to unexpected places for offense. Leadoff hitter Rafael Furcal has been on fire since getting off of the disabled list for a sprained hamstring two months ago. The shortstop, who underwent back surgery two years ago, has finally returned to top form and appears none the worse for wear as he presently leads the National League in batting average.

Speaking of back surgery, catcher Brad Ausmus was in the lineup Saturday, July 24, for the first time since his operation for a herniated disc. The 41-year-old veteran drove in a run and caught 12 innings in a game the Dodgers eventually won at the bottom of the 13th. It was Ausmus’ first start after a three-and-a-half-month rehabilitation.

“I’ve always believed if you sign a contract with a club for a season, it’s your obligation to get yourself in shape as soon as possible,” Ausmus offers in the clubhouse after the game. It’s too bad Ramirez wasn’t in the nearby vicinity to hear the words. The injured slugger has a habit of leaving games early. Since Ramirez declines questions from the press, one can only speculate on the inner thoughts brewing beneath the infamous mane of dreadlocks. Is he secretly burning to get back on the field, or is his seemingly carefree attitude the cloth of profound baseball wisdom? Or does he simply not really care that much? Although this latter opinion is popular among more cynical Dodger fans, it would be wise to let time tell. What is certain is that a strong presence in the lineup of a healthy Manny Ramirez would be greatly appreciated down the stretch.