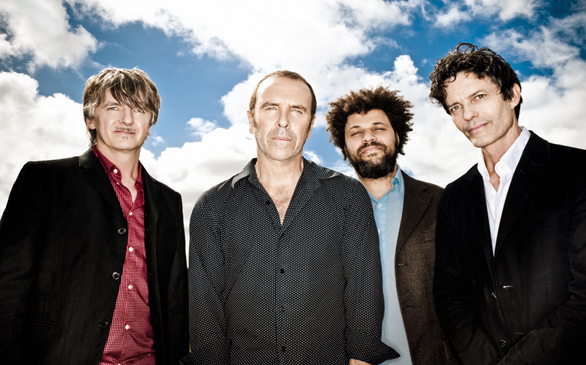 Crowded House is a superstar band in their native New Zealand and in Australia, and they do pretty good in Europe as well. American fans on the other hand pretty much wrote the band off after their two mid-’80s hits, “Don’t Dream It’s Over” and “Something So Strong.” Things have kind of come full circle for the band now, and in this era where it isn’t mandatory to have radio hits to be popular, a whole new generation has discovered Crowded House’s take on melodic pop.

And what a good time it is to be a fan, old or new. Singer Tim Finn has a field day on Intriguer, toying with a brighter sound than Crowded House has employed for quite some time even though songs like the sparkling “Saturday Sun” have, if you listen closely, darkness at their hearts. That’s one of the hallmarks of Crowded House; Finn’s achingly beautiful singing often belies the real issue at hand. Maybe that’s why this album is called Intriguer – in almost every song Finn sounds like he’s trying to tell you a secret.

Intriguer may ultimately be heralded as the band’s finest work, and longtime fans will love the nods to the old hits in songs like “Twice if You’re Lucky.”