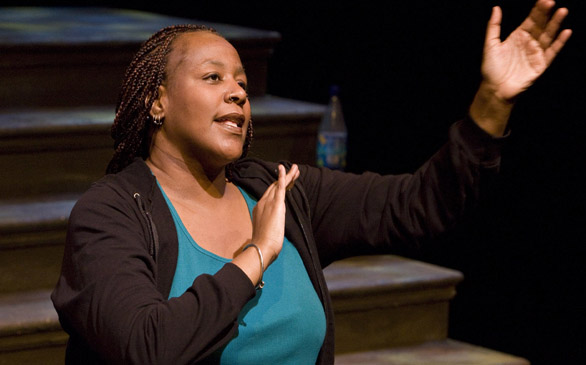 Set in the downtown Culver City area – which feels like its own Greenwich Village with brasseries, bistros and petite cafés – the Kirk Douglas Theatre presented the West Coast premiere of “Stoop Stories,” written and performed by Pulitzer Prize finalist and Obie Award winner, Dael Orlandersmith.

Orlandersmith took the audience on a mystical yet authentic journey through New York, past to present. Jazz music, soft lights and sounds of the city added texture to the bare stage, decorated only with a staircase and a bottle of water, a perfect environment for good storytelling.

Through her eyes and the character’s voices, Orlandersmith described the people, events, circumstances and tragedies that happened on the stoop. Alcohol, teen pregnancy, violence, drugs and alcohol, rats and roaches and broken hearts all happened or were seen from the stoop.

Orlandersmith moved through the city on foot as she told stories about where she was and how that location may have impacted her life or drastically changed for another. At different locales, she became a different character: Herman, the Polish-Jewish man who met Billie Holiday and was changed forever; Hector, a 16-year-old Puerto Rican kid whose mission was to “maintain my cool”; Sugar, the 13-year-old who was a junkie but had a gift for poetry.

Orlandersmith discussed race conflicts, dreams that were never attempted let alone achieved and the concurring theme of dope, which seemed to hover over urban life. She continued her journey from uptown to downtown, painting a colorful picture of the city, its problems, victories and the characters that made New York what it was. As she made her way back to Harlem, she finished in the present, describing 125th Street today and how it will never be “that Harlem” ever again.