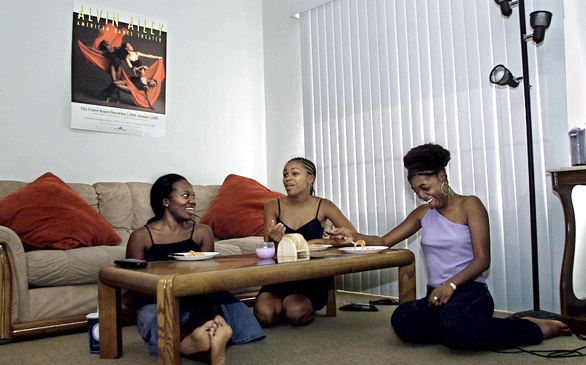 It’s nice when roommates get along. But what do you do when they don’t?
(Credit: Allison Long/Tallahassee Democrat/MCT )

Since transferring to UCLA, I have always had at least one roommate. Though people and personalities vary, this year’s bunch has given me a lot to think (and shout) about. Within the next week, I am moving out on my own, a lone wolf in the big city (too bad life is never like an episode of “The Hills”). But as I ponder on what went wrong, I first and foremost see my roommates this year as good and passionate people; each were involved with activities that affected their communities in very meaningful ways.

So most of the time they were busy helping others, except those they lived with. It was when they came home that things seemed a little off, the room felt colder than before. We had a meeting last month to discuss renewing the lease, and the pros and cons of living with each other.

“For real, there was tension, we need to discuss this,” said one girl. “Denise?” They all looked straight at me.

I quickly put their minds to rest and simply stated I’m moving out. That was all. Quickly the three remaining roommates started to discuss who they wanted to move in with them with a list of criteria that boiled down to: If you didn’t know one of us, then you were not qualified to live here. That mindset seemed to sum up my whole experience on Greenfield Avenue.

As much as I tried to understand and get to know each and every one of them, there was no true dialogue. Simply, the people I lived with were just like the people I see on the elevator every morning. Sometimes you say, “Hi,” if the person was personable, other times you just keep quiet and to yourself. Most of the time I would walk into the kitchen or living room, say hello and get a half-hearted, “Hey,” not even looking up at me, so listless and without feeling it was as if they were simply mumbling to get me to go away. Maybe I’m over-exaggerating, but the truth of the matter is that it pretty much happened every time. I could probably list and complain about everything that got on my nerves, but that doesn’t solve anything.

Well maybe in six words: Can you clean up after yourselves? And let me add three more words: And be hospitable?

As their friends would come over and stay till 2 a.m., my friends couldn’t even stay five minutes without feeling that cold temperature I previously referred to. One of the worst feelings ever was to know that my friends had to sleep in the recreation room on the bottom floor because they felt uncomfortable being in my apartment. The place was huge and can accommodate so many people sleeping on the floor and on the couches, but instead, they had to go sleep in this dingy room. How awful to know that the people I cared about the most and who drove two hours to see me had to be placed in this situation. Am I venting? Oh yes, I am. I would have thought that after coming from the same cultural background and knowing the same people that we would all get along swimmingly, instead, living there just sucked the life out of me.

Lesson No. 314: You will not get along with everyone.

It’s weird because sometimes you can pinpoint the problem to something like miscommunication or a difference in values. However, unless you’re willing to seriously sit down uncomfortably in one room and address the situation, trying to get along with people after a year of living together seems futile. You have to cut your losses and move on. It’s life.

Obviously, there were some passive aggressive issues no one wanted to address, and who knows, maybe if we did talk about it things would have been different. In reality, we were all at fault. No one wanted to take the time to really open up and get to know the other person. As everyone became closed off to each other, we lived as if there were mini walls in between us, and I have to wonder if there was anything I could do to have broken through. Now that I’m moving out, it makes sense that there are some walls not worth breaking.