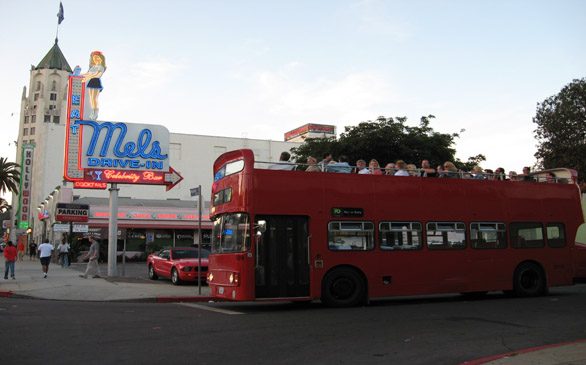 See the city's brightest art on a Saturday night cruise with the Museum of Neon Art.

What happens in Vegas is supposed to stay in Vegas, but after Bill Concannon’s first trip there in 1966, he took his passion for art with him long after. While visiting, he fell in love with the city’s lights and decided he would someday make art like that. The neon lights on marquees and flashing bulbs caught Concannon’s eye, and he was hooked.

The obscure Museum of Neon Art houses many of Concannon’s eclectic and electrifying pieces. The museum also features multiple other fun artists, too.

In the artist’s statement at the museum, he says, “My work is my attempt to take the internal and make it external.”

The Museum of Neon Art also hosts an infamous Saturday night cruise to Downtown Los Angeles and Hollywood, which house a plethora of historical neon signs. MONA focuses on preserving and recognizing neon signs and their like.

Who knew one of the five noble gases could entertain a busload of people for hours? MONA provides a Saturday night like no other. While sipping wine on a double-decker sightseeing bus, you receive an unforgettable history lesson about Los Angeles.

Don’t let the tour bus fool you, though. The attendees are predominantly Angelenos.

The cruise was designed 11 years ago by J. Eric Lynxwiler, and he’s been guiding thrilling Saturday night tours ever since. The three-hour cruise begins in Downtown where Lynxwiler narrates with a plethora of fascinating city history. It’s not a long, boring lecture or anything; after all, there is drinking on board. That alone distinguishes it from any history lecture you’ll ever sit in on at school. You will learn a ton of cool facts about the City of Angels, though, while aboard the double-decker.

After the first hour of taking in the Downtown scenery, you’ll make a brief stop in Chinatown. Then Lynxwiler will lead you on a fun trip to Hollywood. You’ll see the bright lights of Hollywood and take a trip down Wilshire Boulevard for the final leg of the tour.

Of course, Lynxwiler has an abundance of information on Wilshire Boulevard, as he very well should. He co-wrote the book Wilshire Boulevard: Grand Concourse of Los Angeles with Kevin Roderick. Lyxwiler is currently working on his second book.

MONA plans the cruise’s timing perfectly. You can grab dinner before you go, enjoy your three-hour cruise and still have time to go out after seeing all the people of Los Angeles out on the town from atop of the bus.

Fortunately, Lynxwiler keeps the energy up and the crowd laughing for the evening’s entirety. In between his animated jokes, it’s equally entertaining to just sit back and listen to him spout out random trivia off the top of his head at a mile a minute. He’s like a human encyclopedia of the history of our city.

MONA’s Neon Cruise provides some booze, and you’re welcome to bring some of your own along with snacks. Plus, you have a couple of rest stops to buy stuff as well.

Also, keep in mind this isn’t the night to forget to bundle up! California nights can be chilly, so imagine what it’s like on top of a topless bus for hours in the gusting wind.

Catch a tour of this expertly mapped-out excursion of Downtown L.A. and Hollywood soon. Next year, MONA will likely be relocating to Glendale for a, hopefully, bright future.

Art
Homeless artist wants to ‘be the light’ on LA’s skid row
1,322 views

Art
Muralist Robert Vargas is painting a towering history of LA above the traffic
5,191 views