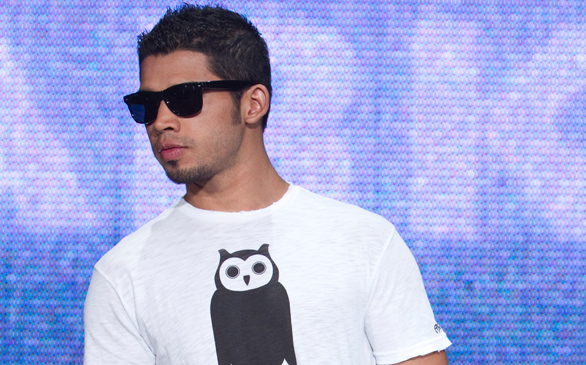 Like the heat wave that passed through this July, a nighttime fashion bazaar was heating up the streets of Hollywood as emerging artists, musicians and fashion designers came together at the Music Box July 13 for Project Ethos. Host Nick Verreos from Lifetime’s “Project Runway” was the show’s master of ceremonies. With his affable personality and amazing blazer (with cool special pleating on the shoulder), Verreos paid homage to fashion sage Tim Gunn, telling the designers showcasing their pieces to, “Make it work!” He even christened the runway with a seriously fierce strut.

The show began with music artist Miguel, who has the sex appeal of Usher and the face of a young Kobe Bryant. Believe me, girls were getting hot and bothered as he grinded on the microphone stand, but it was his music that captured the crowd. People were dancing, screaming and just having a great time.

Despite all the jewelry and art vendors stationed throughout each level of the venue, the obvious main attraction was the fashion show, where designers not only had the opportunity to present their work to the public, but also to the buyers sitting front row with their notebooks and pencils in hand.

Not a lot of pieces stood out, but the Cardiwrap (ubuyez.com), which can be worn over 50 different ways, seemed like a big hit. We’ve seen this type of versatile garment before, but the Cardiwrap’s cardigan-like material (hence the name) makes it worthy of being worn year-round.

B.Vika’s line (bvika.net) was a crowd pleaser as well with its fusion of Indian culture and downtown urban design. The concept was amazing, but it didn’t seem wearable unless you were a Bollywood dancer in a rap video. However, my personal favorite were the artsy screen prints from ARKA (arkaclothing.com) and their signature owl decal, one of the only fashion lines that was realistically wearable for both men and women.

Up above the runway, the Music Box rooftop played host to music, drinks and dancing surrounded by vendors mingling with potential clients. The stylish headband collection from BeSomethingNew (etsy.com/shop/besomethingnew) was a unique discovery amongst the nightclub atmosphere. Tucked away in the corner of the first floor, their indie bohemian headwear wouldn’t stop calling my name from the busy crowd.