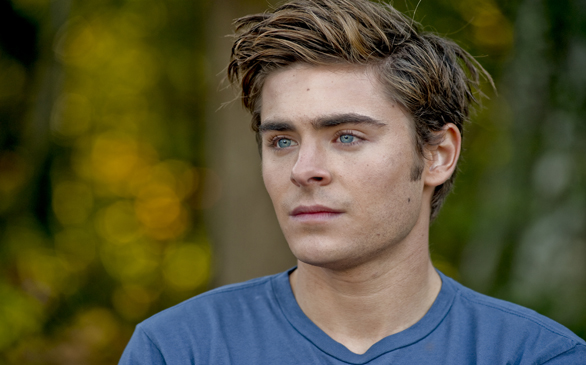 Sitting on a sunny stretch of Marina del Rey on a recent Saturday afternoon, sipping a cup of tea while waiting my turn to speak with Burr Steers and Zac Efron, respectively the director and star of the new film Charlie St. Cloud, I start to notice everyone who passed – joggers with strollers, speed walkers in Shape-ups, tourists in Bermuda shorts – would look above me and get a bizarrely beatific, stupefied smile on their face as they strolled along the waterfront.

What is inspiring those beaming faces?

Efron is sitting in a second story window, brightly lit by television cameras, being interviewed about his latest role. His trademark locks are pushed back to reveal a forehead rarely seen during his meteoric rise in the High School Musical trilogy, making his turquoise blue eyes even more striking, and his relaxed charm is palpable even gazing up at the newly minted movie deity from below. The beach cruisers are being treated to a fleeting glimpse of a movie-star-in-the-making. and the mere proximity to glory has them drunk with wonder.

When I speak to Efron a short while later, I ask if he realizes he has that kind of effect on people.

“Ooff,” he grunts, shaking his head. “It’s not really tangible to me. I don’t really notice it. But I know my mom gets pissed off when she hangs out with me. She walks behind me, and she says no one says anything until after I’ve walked past. After they look and [freak out]. But they never give it away, they’re always really good, so I never see it. I don’t really notice,” he shrugs.

Even if he doesn’t, Hollywood does, knighting Efron the heir apparent to the leading man throne. Although Charlie St. Cloud is only his third major leading role, Efron is already drawing weighty comparisons from Steers.

“All of our leading guys it seems started out as child stars,” Steers points out. “Ryan Gosling was a Mouseketeer, [Leonardo DiCaprio] did ‘Growing Pains,’ Johnny Depp was on ‘21 Jump Street.’ They get those jobs because they’re charismatic and then build on that and understand that there is someplace to go from there, an evolution that has to happen.”

Part of that evolution is strategically chosen roles and the careful cultivation of working relationships. This most recent project has that in spades. The film, based on Ben Sherwood’s novel about a young man literally and figuratively haunted by the death of his younger brother and unable to move past the pain of that loss, reunites Efron and Steers who previously worked together on 17 Again.

Efron brought Steers into the project, feeling the director – who is perhaps best known for his debut, Igby Goes Down – would be able to help him reach the level of performance necessary for the role, and he’s absolutely right. The great revelation of the film is that Efron is quite talented and can handle emotionally demanding material beautifully. So how did the director lead his leading man through the performance?

“I don’t walk anyone through anything,” Steers insists. “I create a situation where actors feel safe.”

He says he focused on the emotional stakes of the film and that made “[Zac] find it in himself. I don’t let him avoid anything.”

Steers explains that one of the things that attracted the actor to the project was his own extremely close relationship with his younger brother, Dylan. Steers used that emotional bond to help Efron tap into his character’s pain.

“I made him go there,” the director says. “This wasn’t an easy process for him.”

Though, according to Efron, one he loved, especially since it reunited him with Steers.

“He’s very generous with the actors,” Efron says. “Every take, he’s running over to talk to us, and he’s got so much to say – an opinion, a new point of view or something to think about – which is great for me. I enjoy that much attention from the director when they really care about your performance.”

It was invaluable guidance the actor craved after deciding to step away from the musical genre that earned him legions of fans, even dropping out of the planned Footloose remake in favor of Charlie St. Cloud.

“There’s a style to High School Musical that I knew I didn’t want to stick with forever,” Efron admits. “It’s incredibly fun, it’s very addicting, those movies, I’m constantly chasing that dragon, so to speak, trying to bring that energy to everything I do, but I definitely want to make films with substance, move on, try new things and see how deep the rabbit hole goes.”

Interviews
'Crazy Rich Asians' made Henry Golding a star. Now he's showing Hollywood everything he can do
793 views