Dinner for Schmucks: A Table Full of Frighteningly Funny Minds 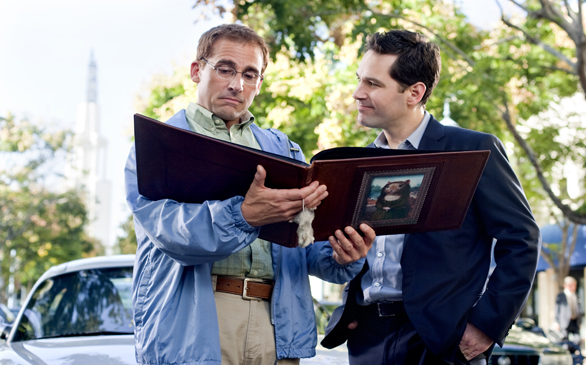 After sharing the screen in The 40-Year-Old Virgin and Anchorman: The Legend of Ron Burgundy, Steve Carell and Paul Rudd team up for a new comedy inspired by the 1998 French film, Le diner de cons. Dinner for Schmucks is about Tim (Paul Rudd), a rising executive who has to find the ultimate imbecile guest to bring to his boss’ monthly dinner party of pathetic losers in order to get a promotion. When he almost runs over IRS employee Barry (Steve Carell) as he’s bent in the street foraging for dead mice to use in his taxidermy still-life dioramas (possibly the best part of the film), Tim thinks he’s hit the jackpot until his new friend causes his life to unravel.

Directed by Jay Roach (Austin Powers, Meet the Parents, Meet the Fockers), Dinner for Schmucks features a powerhouse comedic cast, including Ron Livingston, Zach Galifianakis and Jemaine Clement (“Flight of the Conchords”) in supporting roles. But the weight of that many frighteningly funny minds on one set was an embarrassment of riches that led to one major problem: blown takes thanks to a nasty case of the giggles.

“It’s a challenge not to ruin a take by laughing,” Rudd says in his signature deadpan when the cast gathers for the film’s press day at the Beverly Hills Hotel on a cool July afternoon. “I didn’t rise to that challenge on many occasions.”

Unable to control those irrepressible giggles, when one reporter compares Galifianakis to a combination of “Marlon Brando and Andy Kaufman,” both Carell and Rudd erupt.

“I can’t get that combination out of my head,” Carell giggles. “I want to see that movie!”

When he finally simmers down, Carell continues, “[Zach] is intensely funny, and he’s so specific in the choices he makes. He’s just really a joy to work with.”

Offering similar praise to Clement, who in many ways straps the movie to his back and walks off with it (even in such stellar company), Carells says, “[Jemaine] is a really good improviser in the sense that you never feel him going for a joke, you never get a sense that he’s waiting for his turn to say or do something funny. He’s really just part of the scene and always ends up making it better. He’s a really fine actor. He committed to his character so completely. There’s a sense of calm and inner dignity to the character, even in the face of absurdity, which I just loved. He was a hard person to work with and not ruin takes because he’s just so good.”

“He’s so good at subtlety,” Rudd offers, springboarding off Carell. “There were many moments when he would just say something, it wasn’t really a joke, but it would just really make me laugh. He’s good in everything.”

Continuing the lovefest, both actors have only the highest praise for their director, who they both agree was a major element in their desire to make the film. When asked what their favorite Roach film is, they’re both quick to respond.

“Austin Powers was one of the funniest movies I’d ever seen,” Carell trumpets, “and it was such a surprising movie. That’s what first attracted me to want to work with Jay.”

“One of the things I think is amazing about Jay is how versatile he is,” Rudd offers, referring to Roach’s comedies and his TV movie about the 2000 presidential election, Recount. “He’s such a smart guy. He’s got all this talent and yet he’s the most self-effacing guy, stealthy with his humor, his ability to write, edit. He’s amazing. I was thrilled to get to work with the guy.”

Less based on and more inspired by the French original directed by Francis Veber, who Roach calls “the Mike Nichols of France,” the actors decided the best way to make their performances click was to forge their own path.

“Yeah,” Rudd nods, “to prepare for this I watched the British ‘Office.’”