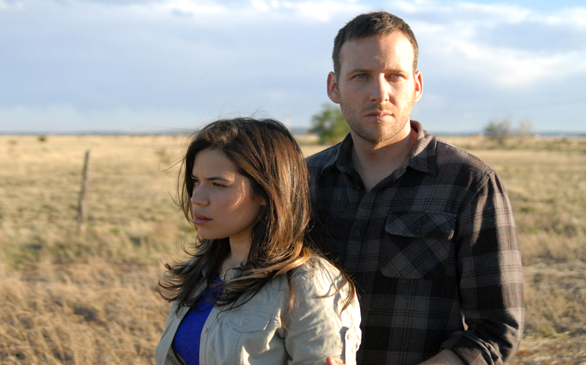 Ryan O’Nan (James) is flawless as the soldier who returns home from Iraq in an attempt to pick up his life where he left off. Albeit painful to bear, the story reveals a hidden agony soldiers carry long after their return home to the States.

O’Nan takes his role and runs with it. He is given a once-in-a-lifetime and irrefutably takes full advantage of it.

The Dry Land leaves the audience with an indescribable feeling of simultaneous amazement and grief. It certainly sheds a compassionate light on our country’s soldiers.

America Ferrera (Sarah), who also serves as executive producer, holds her own as O’Nan’s devoted wife. She has delivered brilliant performances prior to The Dry Land, but she has yet to take on a role like this one. Her acting is superb and award-worthy.

Academy Award nominee Melissa Leo (Martha) portrays James’ mother with a notably convincing devotion to her family. Wilmer Valderrama also offers a memorable performance as James’ army buddy Raymond. Together James and Raymond take an impromptu road trip to visit a mutual friend who is hospitalized. The men learn invaluable lessons on this spontaneous and brief adventure that most couldn’t fathom in a lifetime.

Unexpectedly, The Dry Land doesn’t lean on flashbacks from the war as a crutch. The actors’ conflicted emotions remarkably show you everything necessary.

With Ryan Piers Williams’ fantastic directorial debut, his career is sure to skyrocket. You will leave the theater still feeling the film’s enormous weight. Not only will it move you; it will change you.